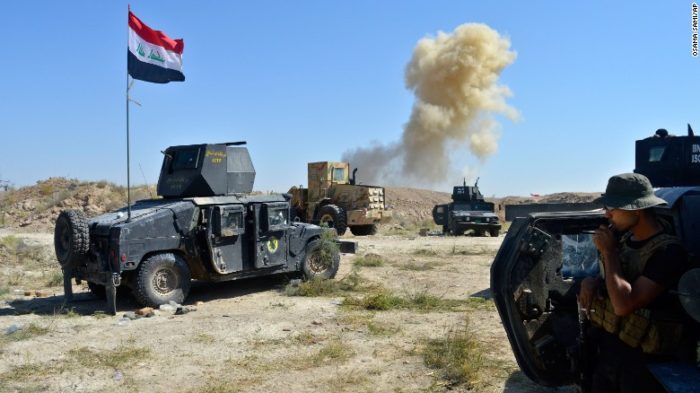 Let’s hope that the Iraqi-led operation can help get these kids and people out safely of Fallujah… It seems like the Iraqi forces have their act together.

ISIS-held Fallujah is surrounded by Iraqi-forces, which are expected to storm the city soon.

There are reports that hundreds of families are being used by ISIS as human shields in the center of Fallujah; that men and boys who refuse to fight for ISIS are being executed; and that civilians have been killed in heavy shelling, according to the U.N.

And many experts believe that ISIS has booby traps, snipers, IEDs and other deadly surprises waiting.

“This will not be without cost,” said Lt. Col. Rick Francona , another CNN military analyst. “The outcome is pretty much assured — [the question is]what is the cost going to be on either side.”

Some analysts say it will be a while before the terror group is driven out of the city.

“This is going to be a tough fight,” says retired Lt. Gen. Mark Hertling, a military analyst for CNN. “The Iraqi government says they should close it down within two days and clear the forces. I doubt that… I think it’s going to take much longer than that.”

Hundreds, mostly women and children, fled Falluja on Friday as Iraqi soldiers attacked to drive ISIS from the city, the Iraqi military said.

Those who escaped say the city lacks food, clean water and medical supplies. “With every moment that passes, their need for safe exits becomes more critical,” said Nasr Muflahi, the Norwegian Refugee Council country director in Iraq. “Getting there in the first place is near impossible for those in the city center.”

The Iraqi-led operation to liberate Falluja is just days old, and the city is already surrounded.

Experts say they’re surprised at the professionalism and efficacy of Iraqi forces, which were in tatters nearly two years ago.

“They seem to have gotten their act together — they did exactly what they were supposed to do,” Francona said. More