My question is why did over 20 newspaper pick this particular letter to run? Democrat astroturfing EXPOSED.

Soros is focused like a laser beam right now spending money big time making sure Judge Brett Kavanaugh does not get elected to the Supreme Court. This is just the tip of the Iceberg! 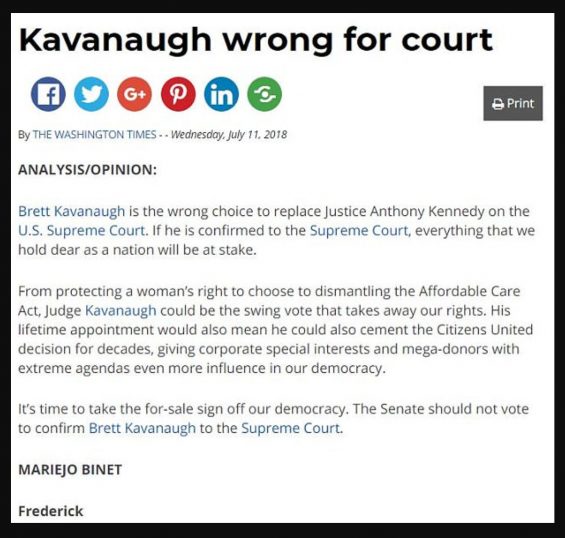 Judge Brett Kavanaugh is going into the Supreme Court confirmation process with a hail of rhetorical arrows zinging by him, including a phony letter-writing campaign aimed at unsuspecting American newspaper editors

At least 21 papers were duped last week, including big-market brands like the Dallas Morning News and The Washington Times. They ran identical letters over a four-day period, each signed by a different person.

The effort is an example of public-relations ‘astroturfing,’ a technique meant to simulate genuine grassroots support for an idea or cause.

The form letter is one small piece of the message minefield erupting around Kavanaugh as he prepares for a brutal confirmation process that will end with scant support from Democrats.

It begins by declaring that ‘Brett Kavanaugh is the wrong choice to replace Justice Anthony Kennedy on the Supreme Court. If he is confirmed to the Supreme Court, everything that we hold dear as a nation will be at stake.’

It warns that he could be a swing-vote on the high court ‘that takes away our rights’ and awards new levels of political influence to ‘mega-donors with extreme agendas.’

Three of the newspapers contacted Friday by DailyMail.com later removed the letters from their websites. Two, the Morning News and the Union Democrat of Sonora, California, publicly explained why.

In an email Saturday, White House Deputy Press Secretary Raj Shah shrugged off the practice as inconsequential and amateurish.

‘I suppose that’s a clever way to ensure message discipline,’ he said, ‘but we think most Americans will see through these tactics and be impressed with Judge Kavanaugh’s sterling record and qualifications.’

Richard Lodge, editor of The Eagle-Tribune in North Andover, Massachusetts, said Friday after hearing from DailyMail.com that he called the apparent ‘signer’ of the letter his paper ran, and ‘[s]he said she didn’t send it.’

The woman recalled receiving a phone call from an anti-Kavanaugh activist asking her to sign an online petition against him days before the letter was sent in her name. More

This just shows how well Donald Trump’s choice of nominee really is because it has the Democrats running scared.