If someone is here illegally, regardless of what their parents did, they are illegal just the same. Send the entire family back to their homeland ASAP. Building the wall and enforcing our immigration laws is the most important issues of the day.

Who wants to deport “Dreamers”? Not many people, it turns out. Even veteran immigration restrictionists seem willing to legalize this subset of immigrants in the country illegally if it is part of a package deal. That’s true even though a lot of what’s said about the DACA recipients is PR-style hooey. 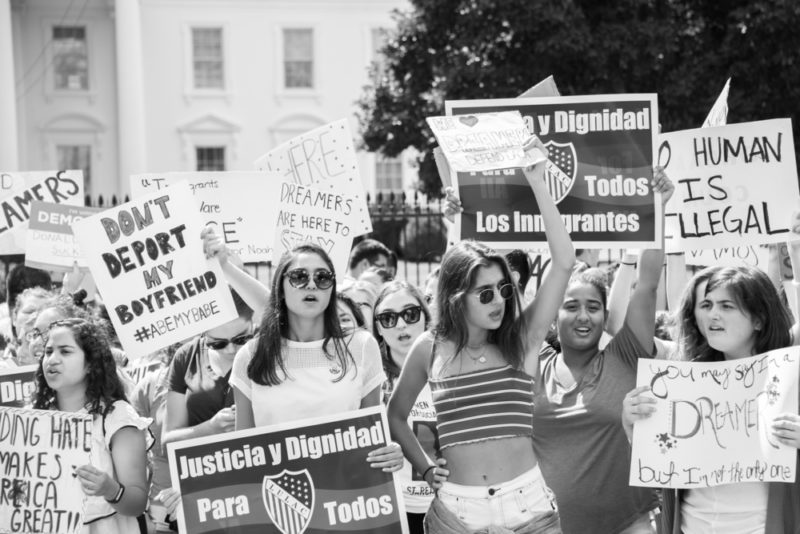 For example, it’s often said — indeed, former President Barack Obama just recently said — that the approximately 800,000 of them were “brought to this country by their parents.” Well, many were. But that’s not required to qualify as a protected Deferred Action for Childhood Arrivals program recipient under the various plans, including Obama’s. You just have to have entered the country illegally before age 16. You could have decided to sneak in against your parents’ wishes. You’re still a “Dreamer!”

Likewise, we’re told DACA recipients are college-bound high school grads or military personnel. That’s an exaggeration. All that’s actually required is that the person enroll in a high school course or an “alternative,” including online courses and English-as-a-second-language classes. Under Obama’s now-suspended program, you didn’t even have to stay enrolled.

Compared with the general population, DACA recipients are not especially highly skilled. A recent survey for several pro-”Dreamer” groups, with participants recruited by those groups, found that while most DACA recipients are not in school, the vast majority work. But their median hourly wage is only $15.34, meaning that many are competing with hard-pressed lower-skilled Americans.

34 Republicans in Congress are not about to let the pesky facts about Obama’s “Dreamers” get in the way of lobbying Speaker Ryan to grant them permanent citizenship. 100%FedUp.

Numbers USA reports– Thirty-four Republicans in the House of Representatives signed a letter to House Speaker Paul Ryan calling for passage of a permanent DACA amnesty before the end of the year. Reps. Scott Taylor (R-Va.) and Dan Newhouse (R-Wash.) led the effort.

While the lawmakers stop short of demanding passage of a DACA amnesty before the end of the year or including an amnesty in this month’s must-pass spending bill, they don’t insist on any other immigration-related provisions that would stop future flows of illegal immigration by calling for mandatory E-Verify or to reduce the numerical impact of the amnesty by calling for an end to Chain Migration.

We write in support of passing of a permanent legislative solution for Deferred Action for Childhood Arrivals (DACA) recipients before the end of the year. DACA recipients — young people brought to America through no fault of their own — are contributing members of our communities and our economy. For many, this is the only country they have ever known. They are American in every way except their immigration status.

Since DACA’s inception, the federal government has approved approximately 795,000 initial DACA applications and 924,000 renewals. Since being approved for DACA status, an overwhelming majority of these individuals have enrolled in school, found employment, or have served in the military. Studies have shown that passing legislation to permanently protect these individuals would add hundreds of billions to our country’s gross domestic product (GDP). That is why the business community, universities, and civic leaders alike support a permanent legislative solution.

We agree with President Trump that executive action was not the appropriate process for solving this issue, as was done under the previous administration, and we believe Congress should act. We are compelled to act immediately because many DACA recipients are about to lose or have already lost their permits in the wake of the program’s rescission. Not acting is creating understandable uncertainty and anxiety amongst immigrant communities.

While we firmly believe Congress must work to address other issues within our broken immigration system, it is imperative that Republicans and Democrats come together to solve this problem now and not wait until next year. We all agree that our border must be enforced, our national security defended, and our broken immigration system reformed, but in this moment, we must address the urgent matter before us in a balanced approach that does not harm valuable sectors of our economy nor the lives of these hard-working young people. We must pass legislation that protects DACA recipients from deportation and gives them the opportunity to apply for a more secured status in our country as soon as possible. Reaching across the aisle to protect DACA recipients before the holidays is the right thing to do.

Here’s the list of 34 Republicans who need to be drained from the swamp:

Numbers USA does an amazing job of exposing the truth about illegal immigration and what it really costs the American taxpayer. Nearly all funding for NumbersUSA Action comes from individuals giving $10, $25 and $100 donations over the internet.  If you can afford to make even a small donation, it will help them to continue to help Americans change immigration policies. You can donate to Numbers USA HERE.