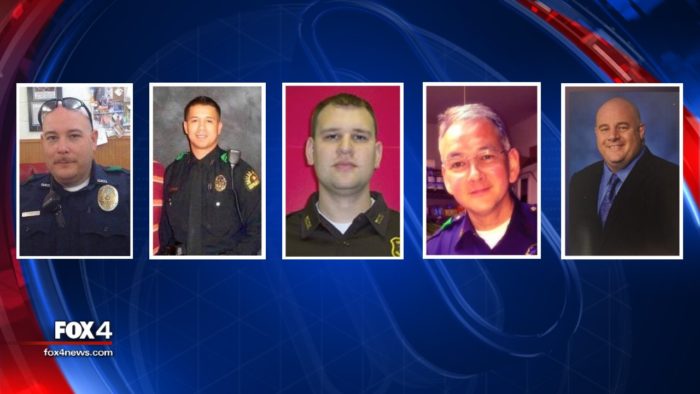 What a tragic and senseless loss for the Dallas area, Police communities, and for the friends and families of these fallen officers.

Five Dallas police officers were killed Thursday night when a sniper opened fire on them at a rally against police brutality.

The gunman was identified as Micah Johnson, 25, a resident of the Dallas area. Police said he expressed a desire to kill white people, especially police officers, and anger over recent police shootings.

Three other people were taken into custody, but officials are saying that Johnson acted alone and was not affiliated with any group.

All five of the officers who were killed have now been identified, according to FOX4 News Dallas-Fort Worth. The last two officers to be identified are Mike Smith and Lorne Ahrens.

Here’s what we know about them…

Brent Thompson, 43, was a DART transit police officer since 2009 and is the first DART officer killed in the line of duty.

Thompson taught at the police academy, previously serving as a private contractor in Iraq and Afghanistan and was a grandfather.

He served in Iraq and Afghanistan helping to train local police forces. He had previously served in the Marines.

He was said to be in “great spirits” recently following his marriage to a fellow DART officer.

A second officer killed in the attack was identified as Michael Krol, 40. He was a member of the Dallas P.D. since 2007, previously serving as a Wayne County Corrections officer in Detroit before moving to Dallas.

His stepmother told the Daily News that she texted him last night after she heard about the shooting, but got no response.

She said the family is devastated and that Zamarripa, who has a wife and a two-year-old daughter, “loved being a cop.”

In an emotional interview with Shepard Smith, Zamarripa’s uncle, Hector, said his nephew loved the Dallas Cowboys and Texas Rangers.

He said that Patrick’s “dream” was to be a Dallas police officer and he “enjoyed serving his community.”

Hector said Patrick also “loved” serving his country in the Navy, then deciding to start a career as a police officer.

Zamarripa’s last tweet was to wish his “beloved America” a happy birthday on the 4th of July.

He leaves behind his wife of 17 years and two daughters, ages 14 and 9. A GoFundMe pagehas been set up by friends of the family to help pay for funeral expenses as well as to “start a fund for whatever the family may need to get through the coming years.”

It asks that people, “Please give to help protect this family as Officer Smith did for the City of Dallas. Any amount is appreciated.  All of the Smith’s family, friends and acquaintances are devastated and are trying to figure out how to help the family navigate through these times.  Please help us provide a cushion to the blow of losing their loved one.”

Senior Cprl. Lorne Ahrens, the fifth victim, was a 14-year veteran of the department. He leaves behind a wife, a 10-year-old daughter and 8-year-old son.

His father-in-law told The Washington Post the 6-foot-5, 300-pound former semi-pro football player from California could turn heads just by showing up.

The paper reports that Ahrens one sprinted fast enough to tackle a suspected cocaine dealer running away from a bust, who dropped a .38 caliber pistol, and an SKS assault rifle was found in the suspect’s house.

On more than one occasion, Ahrens went to his daughter’s school in uniform to talk about policing and safety.

Apparently he didn’t see the pictures of all the dems not wearing masks as well
January 17th, 2021 The Real Side With Joe Messina
SHARE