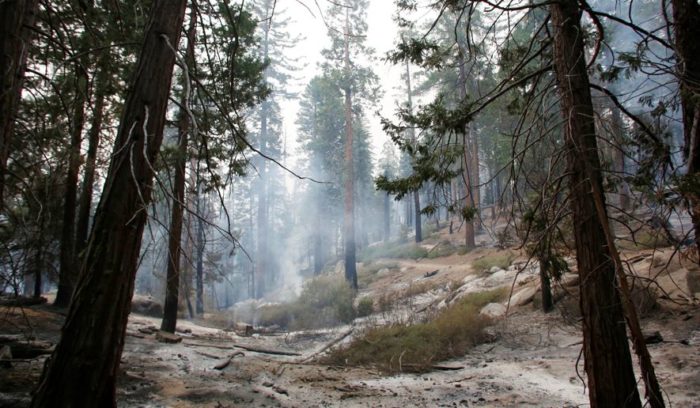 Sanctuary cities need to go away. The Government can’t keep the illegal criminals safe from being deported. This guys should have been locked upped for good.

Angel Gilberto Garcia-Avalos had been deported five times in just the past four years, yet each time he has managed to sneak from Mexico back into the U.S., where he ended up in more mischief: driving without a license, attempted burglary and felony weapons charges.

In August, he graduated to full-fledged mayhem, sparking a fire in the Sequoia National Forest that has already cost the government $61 million and left some of the country’s most beautiful landscape scarred for years to come.

Garcia, who pleaded guilty last month and faces 13 months in prison, had only recently been released from the Kern County Jail. He likely would have been deported again, but local authorities were unable to report him to immigration authorities because of California’s new sanctuary city law, which prohibited the sheriff from communicating with federal agents.

Federal agents now say they will kick Garcia out of the country once he serves his latest sentence, but the damage has already been done.

At a point along State Highway 155 through the Sequoia National Forest, the smell of cedar gives way to the stench of soot. Ash-blackened trees above and below the roadway show the path of the blaze.

Investigators determined that the spark came from a Nissan Maxima that Garcia was driving over a rough dirt trail near Cedar Creek. Garcia tried to drive over a berm and hit a tree. The hot muffler on his car ignited grass parched by years of drought, investigators said in an account filed in federal court.

Ranchers rushing to the site of the fire saw Garcia who, despite the blaze raging over his shoulder, insisted he wasn’t aware of it much less responsible for it.

Investigators punctured his story by matching footprints from the car to those of Garcia and his son.

John Chatel, an endangered species specialist who led the Forest Service’s evaluation team after the fire, said it wasn’t the most damaging burn he has seen but added that the effects could last for years.

Of the 29,000 acres that were touched by fire, more than half sustained moderate or high-intensity burns. Communities were evacuated in two counties, and a handful of cabins and outbuildings were scorched.

It took six weeks to fully contain the fire. Officials warned at the beginning of October that hot spots could persist until the first snows blanket the area and snuff out the last vestiges.

The fire didn’t spread to Sequoia National Park to the north of the forest, which is home to groves of the majestic trees.

But it took more than $60 million to contain and extinguish the blaze. Mr. Chatel submitted an emergency restoration plan at a cost of $500,000. That doesn’t include long-term restoration of campsites, cattle-grazing areas and long-term revegetation.

Mr. Chatel said the drought, now in its fifth year, probably will make it tougher for the forest to recover.

“It’s got to be really challenging — not impossible, but challenging — for a lot of the forest that was there historically to come back in a reasonable amount of time,” he said. “It’s going to take decades and decades from a conifer standpoint to get back what you lost.” More