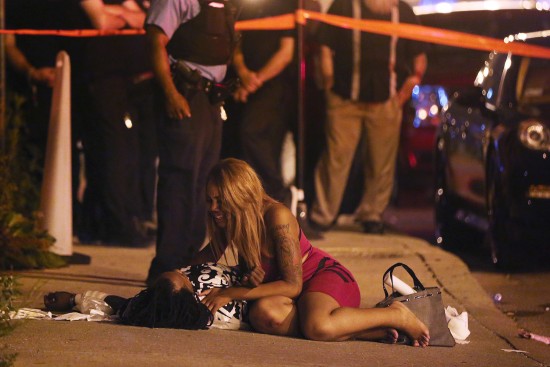 Those strict gun laws in Chicago are sure working out for them… The Dems aren’t paying any attention to what is going on there because they already got their gun laws passed there.

Seven people were killed and at least 35 others — including a 5-year-old girl — were wounded in shootings across Chicago between Friday night and Monday morning.

The weekend’s latest homicide happened Sunday morning in the Englewood neighborhood on the South Side.

About 8:35 a.m., an officer on patrol found 32-year-old Dwayne T. Triplett slumped over at the wheel of a vehicle near his home in the 1100 block of West 72nd Street, according to Chicago Police and the Cook County medical examiner’s office.

He suffered gunshot wounds to the head and chest, and was pronounced dead at the scene at 8:53 a.m., authorities said.

Earlier Sunday, two men, ages 34 and 42, were slain on a Brainerd neighborhood porch on the South Side. Officers responding at 1:13 a.m. to a call of shots fired in the 9000 block of South Marshfield found them dead, one shot in the head and the other in the neck, police said.

Authorities have not released their names. Family members identified the older man as Antwon Brooks, a father of two.

Late Saturday in Back of the Yards, a 17-year-old boy was killed and a 19-year-old man was wounded in more South Side gunfire.

The older teen was taken to the same hospital with an arm wound. His condition stabilized, police said.

About 1:30 a.m. Saturday, an 18-year-old south suburban man was fatally shot in the West Chatham neighborhood on the South Side. Travell Montgomery was on a porch in the 8800 block of South Princeton when three gunmen walked up and opened fire, shooting him in the head, authorities said.

Montgomery was taken to Advocate Christ Medical Center in Oak Lawn, where he died at 7:55 p.m., authorities said. He lived in the 16800 block of Western Avenue in Hazel Crest.

Friday night, a 27-year-old man was shot to death in the South Chicago neighborhood. Jeremy H. Ray was outside in the 8900 block of South Brandon about 9:35 p.m. when two gunmen got out of a car, walked up and opened fire, striking him repeatedly, authorities said. The shooters then drove off.

Ray, who lived in the 4200 block of West 112th Place, was taken to Advocate Trinity Hospital, where he was pronounced dead at 10:27 p.m., authorities said. More