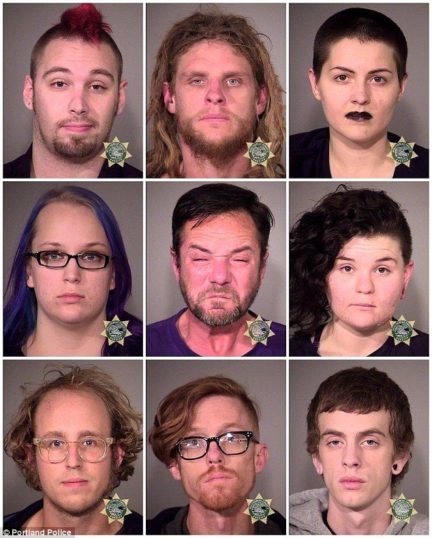 Is this what peaceful protesting looks like in Portland? How is rioting, throwing bottles at police, and blocking the roadways going to change anything?

A whopping 71 people were arrested in Portland during the fourth night of anti-Trump protests that saw police hurling flash grenades and tear gas on demonstrators.

Authorities say most individuals failed to comply with several lawful orders to vacate city streets in the downtown area of the city.

In addition, projectiles including road flares and bottles were thrown at police officers throughout the evening. A police vehicle was also spray painted with an anti-Trump message.

Five people were given criminal citations, while 67 people were booked into the Multnomah County Jail. A total of nine people did not have a mugshot photo taken by authorities.

Everyone arrested on Saturday was also charged with a traffic citation for Failing to Obey a Police Officer.

At 11pm on Saturday, a large group of people were apprehended by officers at the intersection of Southwest Stark Street and Broadway.

A large city bus was used to transport the majority of people jail. The people arrested range in age from 18 to 54 years old.

Before the fourth night of protests began against president-elect Donald Trump, Portland Mayor Charlie Hales and Police Chief Mike Marshman called for protesters to stay home and to voice their opinions with the election in other ways.

‘Going to the streets for another night is not going to keep Donald Trump from taking office. It isn’t going to change anything,’ Hales said. ‘If you’re upset with the election, please don’t come out and protest.’We are done with criminal activity in this city. It’s time to move on and to move forward.’

In order to control the huge crowd of protesters, police resorted to using tear gas and flash grenades. More