100%FedUp: The mindset of an abortion doctor is impossible to wrap your mind around if you have a heart. The cold and callous way in which abortionists treat the unborn baby is heartbreaking and sickening. Who would choose to murder a precious unborn baby?

A rare look into the mindset of an abortion doctor was just deleted off of Twitter. A so-called “doctor” posted a disgusting Tweet about how she keeps the unborn baby from screaming during an abortion. It’s horrific…

One day soon, history will remember Torres and her ilk the same we remember Josef Mengele. They’re representatives and perpetrators of the greatest genocide in human history.

Yet no one – NO ONE – is beyond the mercy of God, so we continue to pray for them. https://t.co/IQGA7Thyil

When the person asked if Torres hears the screams of the babies who she aborts, she replied:

“You know fetuses can’t scream, right? I transect the cord 1st so there’s really no opportunity, if they’re even far enough along to have a larynx. I won’t apologize for performing medicine. I’m also a ‘uterus ripper outer,’ if that’s how you’d like to describe hysterectomy.” 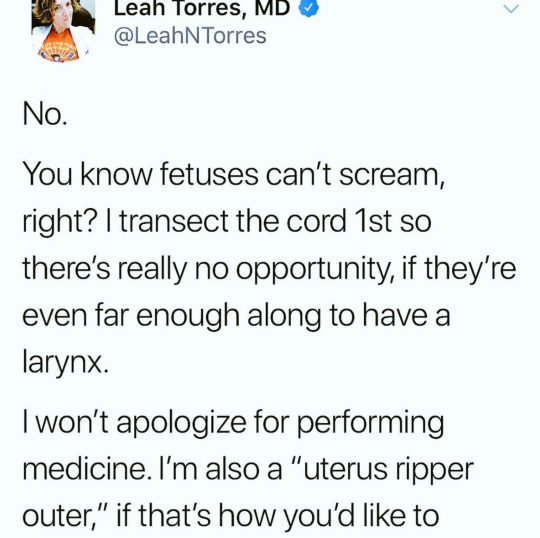 While the abortion industry tries to sanitize the brutal business of slaughtering unborn babies, this abortionist comes out every now and again to reveal the intense darkness at the core of abortion. We pray that one day she will have a change of heart. pic.twitter.com/oETIlIlPQp

Abortionist Leah Torres deleted her brutally honest tweet about killing unborn babies this week after it resulted in a lot of bad publicity for the abortion industry.

My friend asked me to. See, the thing is, she is trying to open dialogue between “pro-life” and “pro-choice” here in Australia, for the greater good of reproductive health.

Folks allowed the post to inhibit progress, so, it’s off my feed.

Torres, a Utah abortionist who is active on Twitter, posted the original tweet Sunday in response to someone criticizing her work.

Torres deleted her original post as a result of the backlash.

The sickening reality of abortion that Torres callously exposed garnered a lot of attention from LifeNews.com and other conservative media outlets and figures.

Torres did not apologize or backtrack on what she said. Instead, her apparent motivation for deleting the tweet was the bad press.

The abortion industry does not like to admit the gruesome, deadly reality of its trade. Every year, it kills nearly 1 million unique, living unborn babies in America, but it disguises its deadly work with propaganda about “choice” and “care” and claims women have a “right” to abortion without restriction.