Isn’t that special. She’s living in the US after fleeing Africa because of the genocides, rapes, mutilations, civil wars, and diseases. Now she is here to set America straight…

Tony Award-winning Nigerian-British actress Cynthia Erivo used her Verified Blue Check Mark Twitter account to post a threatening message to President Donald Trump on Friday, invoking ‘Juju, voodoo and magic’, warning Trump he is ‘not safe.’ The threat was made in response to alleged comments by Trump in an Oval Office meeting with lawmakers about immigration in which he referred to African nations as ‘s***hole countries’. Trump denies he used that word but acknowledges using ‘tough’ language. 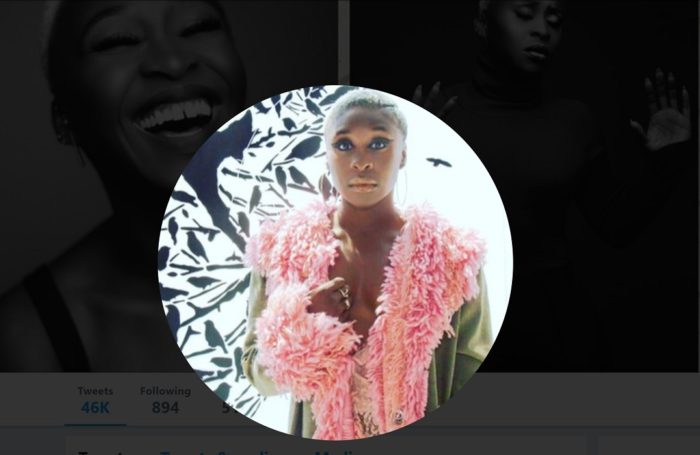 Erivo used a few Pidgin words in her threat to Trump:

“I hope all the Africans in this world call on their ancestors. See you forgot. Juju, voodoo, magic. Don’t worry Donald, we are the wrong ones. You are not safe because you are on another continent. Biko do yourself a favor, take a break. Wahala de come for you oh.”

I hope all the Africans in this world call on their ancestors. See you forgot. Juju, voodoo, magic. Don’t worry Donald, we are the wrong ones. You are not safe because you are on another continent. Biko do yourself a favor, take a break. Wahala de come for you oh.

Erivo responded to her critics (many of whom were bothered by her use of Pidgin), claiming to be a believer in Jesus Christ and that she is a ‘Nigerian-Brit’ currently living in the U.S.

I’m actually a Nigerian Brit living in the USA. Research is key. https://t.co/tkPpFph75s

I believe in Jesus Christ 😒 https://t.co/xqzjKsip74

Erivo called a critic ‘ridiculous’ for invoking the Secret Service.

The Wikipedia entry for Erivo reads in part: Erivo is known for her performance as Celie in the 2015 Broadway revival of The Color Purple, for which she won the 2016 Tony Award for Best Actress in a Musical as well as the 2017 Grammy Award for Best Musical Theater Album. She performed the role in the 2013 Menier Chocolate Factory production as well. Erivo is also known for her performance as Deloris Van Cartier/Sister Mary Clarence in the UK tour of Sister Act.

Erivo was born to Nigerian parents in Stockwell, South London.[1] She attended La Retraite R.C Girls School. Erivo began a music psychology degree at the University of East London, however a year into her degree, she applied[2] and subsequently trained at the Royal Academy of Dramatic Art.[3]” Read more at TGP.

Kate Shemirani Provides Tips For Those With Glaucoma, Plus Death Of A British MP (Video)
October 16th, 2021 Sons of Liberty Media

Biden Raises More Questions About His Mental State by Twice Forgetting Name of His Employee
October 14th, 2021 Flag And Cross