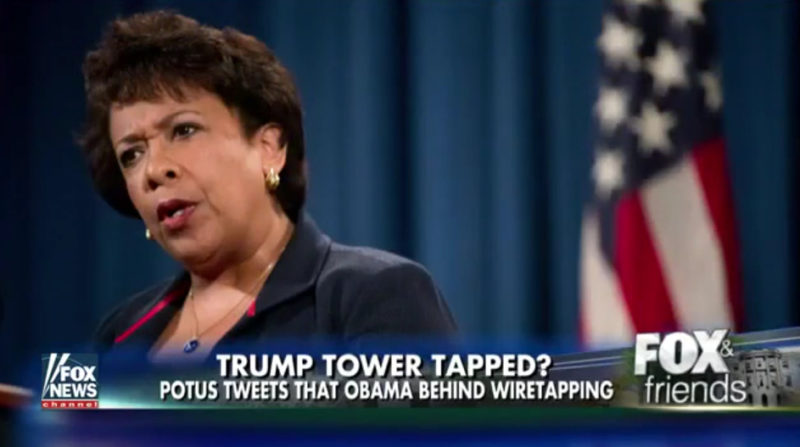 Loretta Lynch’s little speech this weekend was for a purpose, she was begging for blood and death in the streets. She was deflecting and wanting to create a bad situation to bury some news that she feared may come out.

The FISA (Foreign Intelligence Surveillance) Court is in the news this weekend after President Trump tweeted that former President Obama had petitioned a court twice in order to wire tap current President Trump when he was running for office.

Every single judge on the FISA Court as of today was appointed during Obama’s Presidency!

Current Chief Justice John Roberts has been in his role since 2005 and therefore he has appointed all the judges to the FISA court.  Judge Roberts is famous for supporting Obamacare in two radical positions, one of which Justice Antonin Scalia, in his withering dissent, refered to as “applesauce”.  Knowing this, it is concerning that Judge Roberts also is responsible for the makeup of the current FISA court.

Only two in over 10,000 applications were turned down by the FISA Court.

According to ABC News:

More than a thousand applications for electronic surveillance, all signed by the attorney general, are submitted each year, and the vast majority are approved. From 2009 to 2015, for example, more than 10,700 applications for electronic surveillance were submitted, and only one was denied in its entirety, according to annual reports sent to Congress. Another one was denied in part, and 17 were withdrawn by the government.

According to ABC, all applications to the FISA Court were signed off on by the Attorney General and therefore if any applications were processed in the past year, they were signed off on by Loretta Lynch.  This means that Lynch signed off on any requests for wire tapping President Donald Trump during the Presidential race.   This is disheartening knowing that she released a video over the weekend calling for the need for more marching, blood and death on the streets.  This also means that she chose not to investigate the Clinton Foundation for illegal activities but rather signed an application to wire tap President Trump.

Finally, another very disturbing fact about the wire tapping request of President Trump is that the FISA Court turned down President Obama’s Administration’s first request to wire tap President Trump that was evidently signed off on by Attorney General Lynch.  With only two applications denied out of 10,700 from 2009 through 2015, the fact that the Obama Administration’s application was denied by the FISA Court is very disturbing.  The odds of this happening were 0.02%.

The Obama Presidency is now arguably the most corrupt in US history.