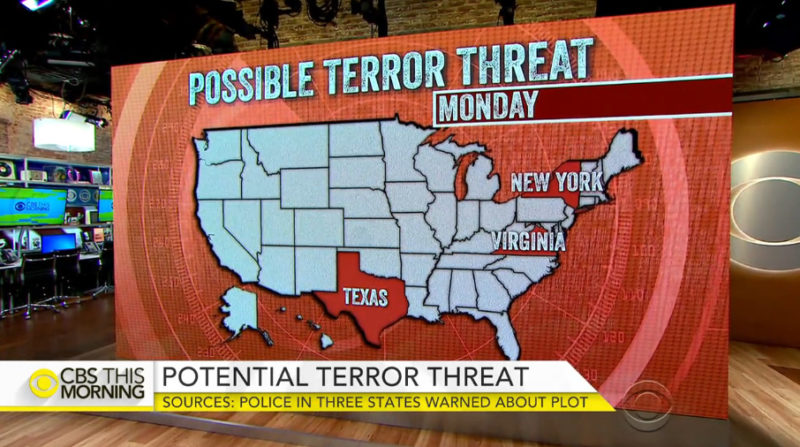 In New York, Texas and Virginia.

Don’t be silly , there is no Al Qaeda anymore. Remember Hillary killed bin Laden from the Situation Room (as she screams at rallies every chance she gets) and then they all just suddenly disappeared…

NEW YORK — CBS News has learned about a potential terror threat for the day before the election.

It is believed New York, Texas and Virginia are all possible targets, though no specific locations are mentioned.

U.S. authorities are taking the threat seriously, though the sources stress the intelligence is still being assessed and its credibility hasn’t been confirmed. Counterterrorism officials were alerted to the threat out of abundance of caution.

A senior FBI official told CBS News, “The counterterrorism and homeland security communities remain vigilant and well-postured to defend against attacks here in the United States. The FBI, working with our federal, state and local counterparts, shares and assesses intelligence on a daily basis and will continue to work closely with law enforcement and intelligence community partners to identify and disrupt any potential threat to public safety.”

Intelligence about potential threats always increases during holiday seasons and when big events are approaching. More

Ballot Typo In Arkansas Hits Hillary In The Mouth!