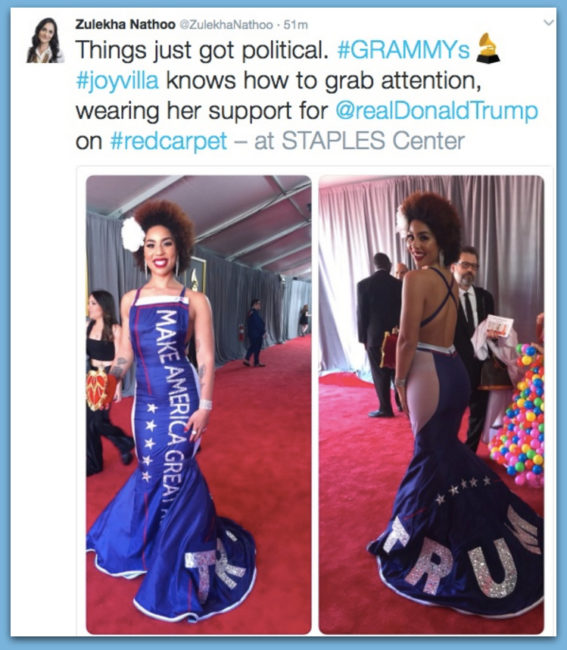 Singer songwriter Joy Villa has kicked off the much expected political side of the Grammy’s but not in a way anyone expected. Instead of coming out and bashing Trump, Villa came out wearing a ‘Make America Great Again’ dress that says ‘Trump’ on the back.

Regardless of what her political views are the decision to wear the dress could prove to be brilliant as she is already receiving tons of media attention for wearing the dress.

Who is Joy? True to the lyrics of her song “Vagabonds”, Joy Villa is a singer songwriter who’s never slowing down. Having lived in Hollywood, Seattle, Las Vegas, and now residing in NYC, touring extensively since 2012 to Asia, Australia the US and Europe.

Joy’s favorite genre has always been rock and roll, and she considers herself lucky to be a female that looks different than the normal “Rockstar”.  A classic renaissance woman, she also paints, models, acts, dances, composes poetry, and writes screenplays and books.

Things just got political. #GRAMMYs #joyvilla knows how to grab attention, wearing her support for @realDonaldTrump on #redcarpet pic.twitter.com/sZ6I3AkkvQ