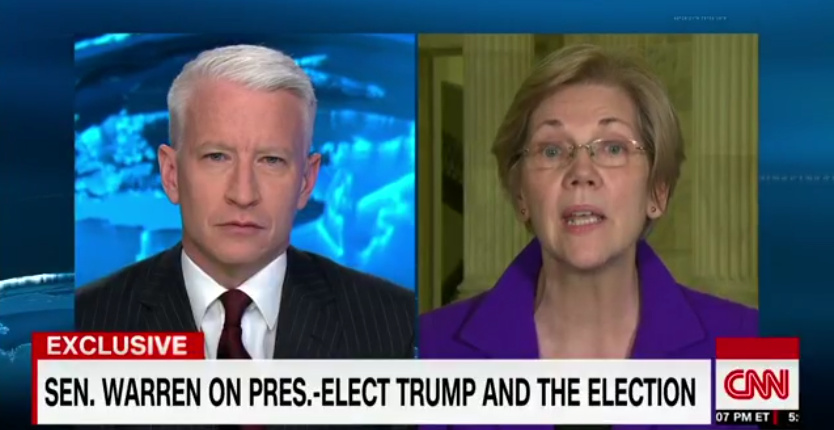 What a disgusting human being Elizabeth Warren is. So Hillary associated with and praised Sen Robert Byrd, a known KKK member. Did that make her a KKK, white supremacist sympathizer? Nope…

Elizabeth Warren has just about lost her mind. Pocahontas, as President-Elect Trump likes to call her, went on a rampage with Anderson Cooper, where she continued to claim that former Breitbart CEO and Trump Chief Strategist Steve Bannon is a “white supremacist.” The only problem? There’s no evidence to back up that claim.

“[Trump’s] got as his strategic adviser someone who’s a white supremacist,” she said of Bannon, the former chairman of Breitbart News, on CNN’s “Anderson Cooper 360.”

“Wait a minute, there’s no evidence he’s a white supremacist,” Cooper said, interrupting Warren. “Obviously, there are people who are white supremacists who support Donald Trump and support Breitbart or Steve Bannon.”

Warren audibly exhaled at Cooper’s remarks before defending her criticism of Bannon, who was also Trump’s presidential campaign CEO.

When is Warren going to realize that her candidate lost and Trump is president?!

Powerful U.S. Jihadist Compounds Are Stockpiling Weapons For This! (Video)