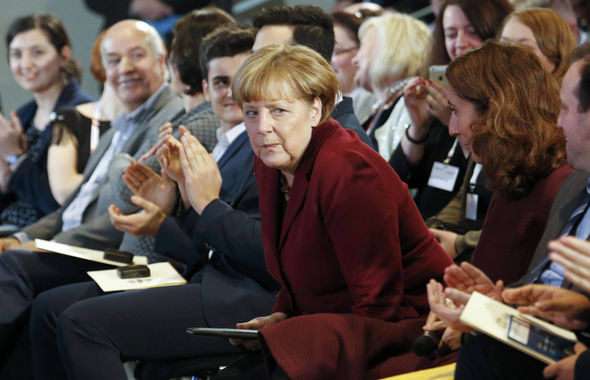 How long will it be before Angela Merkel resigns or makes major changes to her immigration policy?

GERMAN Chancellor Angela Merkel has cancelled a public appearance today and addressed the people of Germany but it can be revealed she was at a service honouring migrants when her own people lay dead in Berlin’s streets.

Mrs Merkel was attending an event to promote her failing migrant policy as a lorry was hijacked in Berlin.

She was photographed looking forlorn just seven minutes after the murder of 12 people took place at the Christmas market just three miles away from the scene.

And her own party is now calling the killing of innocent victims a “war” situation saying they will put “machine guns” on the street.

Now as calls for the 62-year-old to resign grow, opposition politicians are calling on the Christian Democrat leader to completely re-evaluate her policy on immigration.

Germany has accepted 1.1m refugees into the country with police having launched a raid this morning on a refugee camp in a disused airport in Berlin.

Police sources have now said a 23-year-old Pakistani called Naved B who was housed by the state in Berlin is not the suspect and that the suspect is on the run and armed.

Mrs Merkel is yet to comment on this news.

Mrs Merkel has cancelled today’s electoral visit to Mecklenburg-Vorpommern but spoke to the public during a televised press conference.

She said:  “This is a very difficult day.”

However it has been confirmed by a spokesman for the constituency office in Greifswald that she has cancelled her public appearance as she confirmed she is to visit the scene of the crash.

The chancellor wanted to visit Rügen, Stralsund and Greifswald during her short visit before Christmas.

Now as social media has erupted with calls for the leader of Germany to resign Ms Merkel’s party has furiously hit out describing the situation as a “state of war.”

German politician Klaus Bouillon of Mrs Merkel’s CDU party said told Saarland radio: “We must state that we are in a state of war, although some people who want to see only the good can not see. More