Scaramucci strikes me as someone that can verbally kick your butt before you realize what’s even happening.

A lesson needs to be taught to these leakers one that is particularly severe in nature.

TGP: In a Sunday morning interview with CNN’s Jake Tapper, newly-minted White House Communications Director, Anthony Scaramucci, continued to lay out his plans to strengthen the administration’s messaging. Scaramucci touched on the difficulties of being flexible and changing one’s mind in D.C., while issuing a stern warning to his staff – “[I]f we don’t stop the leaks, I’m going to stop you. It’s really that simple.” 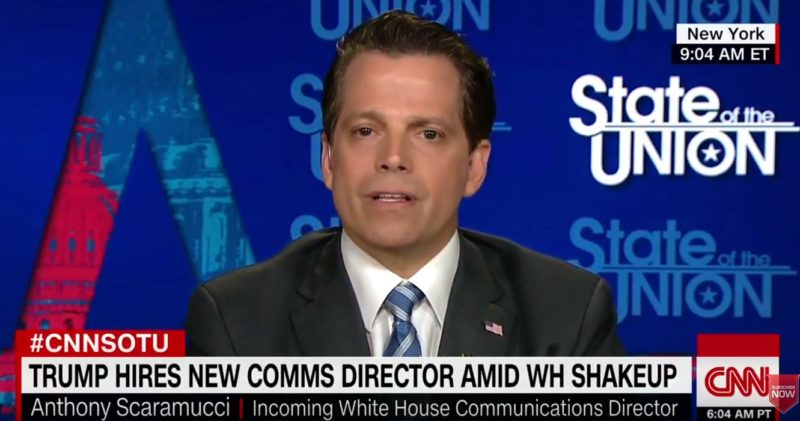 .@Scaramucci on Trump: “He’s the type of coach that I worked very well with in high school football” #CNNSOTU https://t.co/RBgFHsjz30

Anthony Scaramucci: “The President likes speaking from the heart, he likes telling you what he likes and dislikes. He’s the type of coach I work well with in high school football. It’s okay with me if the President doesn’t like certain things that I’m doing, we’re all on the same team. I would prefer the direct and immediate feedback as opposed to anything else. What I don’t like about Washington is if we say one syllable or one sentence, this guy said something bad about me, then all of a sudden they have to be my mortal enemy. I don’t think that’s how it works in American business. I can set across the table from somebody that works with me in my company that I founded and say here are five things that I don’t like what you’re doing and we have to fix it. By the way, tomorrow I’m going to be having a meeting with the communications staff and say hey I don’t like these leaks, so we’re going to stop the leaks and if we don’t stop the leaks, I’m going to stop you. It’s just really that simple.”

As The Gateway Pundit previously reported, Scaramucci has received very positive reviews on his performance thus far. Scaramucci’s performance has been called “smooth” and “slick,” much to the chagrin of the liberal media elites.

CNN anchor Dana Bash described Scaramucci as “smooth as silk as a talker.”

“A very polished performance behind the podium from Scaramucci,” observed the Washington Examiner’s chief political correspondent Byron York. “Rare in first 6 months of this [White House].”

US News and World Report senior politics writer David Catanese said, “IF Scaramucci is this calm and smooth six months from now, it’ll serve him, the president and the press very well.”

Vogue editor Elena Sheppard, complained that “Scaramucci is actually terrifying because he’s so smooth and good at this.”