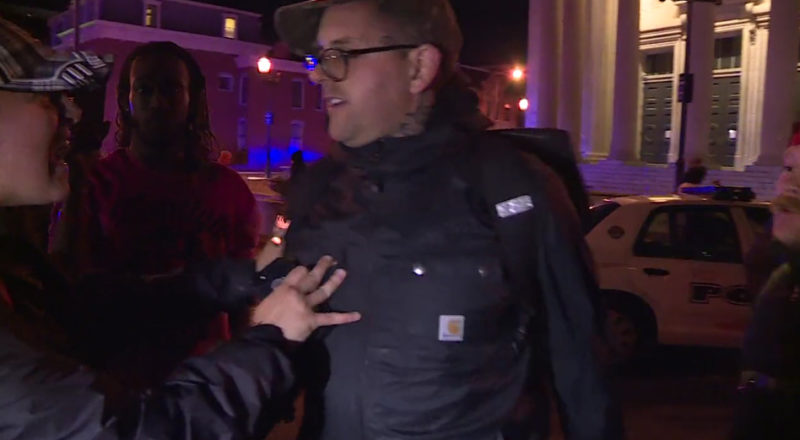 Is this all part of the plan to create a conflagration before inauguration day so Obama can declare a state civil emergency? But my guess is no one is going to take the bait.

Just remember they say we are the intolerant & hateful ones… or something.

Yes, ‘protesters’, you do do that. You do it in every leftist protest, while you blame those on the right for ‘fascism’, you always attack those who you think differ from you. That is true fascism…

ICHMOND, VA (WWBT) – Hundreds of anti-Trump protesters gathered in Richmond Wednesday night, a day after the presidential election. NBC12’s Mike Valerio was covering the protests when someone attacked him.

“You created this, you understand that?!” yelled the unknown assailant.

“We’re not about that!” yelled another protester as they pulled the assailant away from Mike Valerio.

During the protests, the Republican headquarters in downtown Richmond was vandalized, with windows smashed after someone threw a pumpkin at the door. The doorbell was also broken, and graffiti was painted on the building.

Protesters marched onto Interstate 95 around 10 p.m., blocking southbound traffic. Police had removed all the protesters and reopened the lanes by 10:30 p.m.

More protesters blocked off I-195 later in the evening. Police say the protesters sat down on the interstate and refused to move.

According to Richmond Police, 10 protesters were arrested and charged with unlawful assembly and for being pedestrians on an interstate. All of the protesters arrested were between the ages of 20 to 26. Traffic was back open by 12:15 a.m.

Local Democrats condemned the violence and raised $2800 to help GOP repair the office.

Republicans have said they don’t want the money.

The Republican Party of Virginia released a statement claiming, “Clinton campaign, the Democrat [sic]Party and their supporters in the media” fueled antagonism against their camp. State GOP Chair John Whitbeck indicated that he believes Democrats didn’t step in to encourage an end to actions caused by the vandals.

When will Hillary Clinton and Barack Obama condemn these ‘protests’ that are in Clinton’s own words ‘an attack on democracy’.