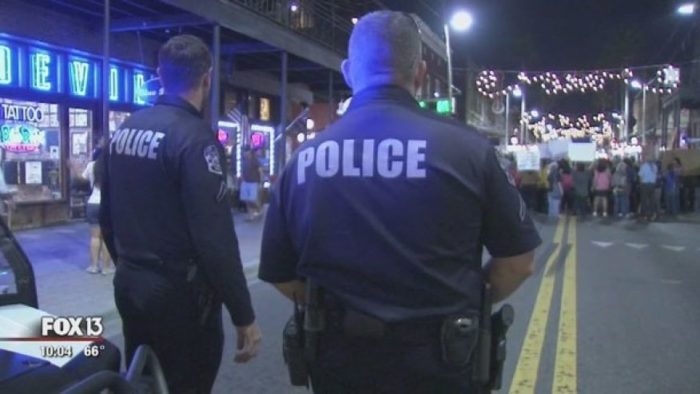 Good thing there was a large cop presence so it didn’t turn in to a violent incident. These anti-Trump protesters picked the wrong street to march down.

An unofficial Marine Corps birthday get-together took an odd turn in Florida Thursday night, when an anti-Trump protest walked by the bar where they’d gathered.

The Marines got into a heated shouting match with the protesters, but a strong police presence prevented things from getting out of hand.

WFTS-TV in Tampa first reported on the incident, which occurred at an Irish pub in Ybor City on Thursday.

About 100 Marines were on the first stop of an unofficial pub crawl to celebrate the Marine Corps’ 241st birthday — the site of the Corps’ first recruiting drive was in a tavern, after all — when a crowd of about 150 protesters passed by, said Johnny Gomes, who was in the Irish pub at the time.

The Marines at the pub “didn’t really care for that” and started yelling back at the protesters, Gomes said.

“Nothing happened other than a lot of screaming and hollering and the Marines getting excited and hollering out ‘America,’” Gomes said.

None of the roughly 300 people involved in the confrontation were arrested or injured, police told Marine Corps Times. No fights were reported. The altercation was limited to shouting.

The whole incident lasted between 20 and 30 minutes before the protesters left, said Gomes, who credits Tampa police with preventing the volatile situation from exploding into a brawl.
“I think that if the police hadn’t been there, probably it could have,” he said. “I’m not saying it would have but it could have. There’s strong feelings on both sides.”
Tags:Marines