100%FedUp: Last week Trump supporters and leftist social justice warriors met on the political field of battle in Berkeley, California. Words were exchanged, as were punches.

Trump supporters stunned the Antifa terror group when they made the decision to fight back. They came prepared for battle to the pro-Trump rally wearing helmets and eye gear to protect themselves against unproved attacks by the anti-free speech Antifa thugs. Even Antifa thugs were forced to admit they were left flat-footed… 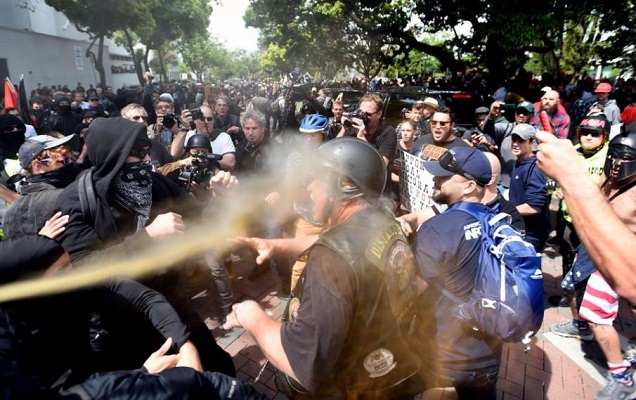 We covered the riots while they were happening in Berkeley. We also highlighted Louise Rosealma, an Antifa female who was punched by a Trump supporter. She claimed that she was punched after she was simply wandering and lost in the crowd (after traveling with her Antifa boyfriend to take part in the resistance movement against Trump supporters). It turns out she was carrying a wine bottle in her hand (she probably just forgot she had that in her hand) and was likely not a passive bystander at all.

Later that afternoon Louise was asked by a reporter if it was okay for members of her terror group to lob M-80’s into a crowd of innocent people. She responded by telling the reporters, “Well, the revolutions isn’t f*ckin’ easy.”:

This poster is offered for sale on the website of the “Oak Roots Collective,” the same CA Antifa group the woman with the wine bottle in her hand and her boyfriend belong to. Louise and her Antifa boyfriend traveled to Berkeley with the intention of shutting down the free speech of Trump supporters, but ended up being surprised by the reaction from mostly male Trump supporters who were not in the mood to have their head cracked open because they hold an opposing political view.

This prompted a reddit discussion among the left’s tolerant resistance movement, with many asking how they can more effectively go to war against anyone who disagrees with their social, political, and economic views.

The anti-Trump protesters at the rally were ill-prepared for what they came to Berkeley to confront and now they are trying to figure out ways to ensure it doesn’t happen again.

In short, as predicted, they are turning to militancy and mob action by mobilizing individuals and groups to attend combat training seminars, acquiring better equipment like baseball bats and helmets, and of course, if things really go bad… guns.

“Yes, we seemed to have lost today. The alt-right held their ground. If we wanna take action against them, we need to be better organized and better trained. It doesn’t help that it’s only the far left opposing them, any trump supporter can be radicalized far easier than any liberal.

I hope we learn from today

A shocking number of our comrades went in there with absolute no combat training. We need to set up seminars or something of the sort.

We also need better equipment, I know the bandanna and hoodie look is our trade mark, but I saw the right wearing motorcycle helmets, and baseball helmets. A dude wearing a helmet is going to keep going if he get punched, our guys are going down.”

And though they are, always have been and always will be “tolerant” and “peaceful protesters,” many are now discussing arming themselves so they can go head to head with the “fascist” and “racist” alt-right.

Really? Antifa thugs are “peaceful protesters?” If they’re so “peaceful” why are they selling these blades on their website? More

Left-Wing Activist Arrested For Role In Capitol Riots, Urged Protesters To ‘Get This S*** Burned’
January 15th, 2021 The Mental Recession

Situation Update – An astonishing theory: FEMA and the US military will save America at its final hour
January 15th, 2021 DC Dirty Laundry

Some Congressmen Finally Willing to Fight… for Islamic Terrorists Who Call for Death to America
January 15th, 2021 Sons of Liberty Media
SHARE