This is just another double standard the Democrats are pushing on America. Apple can remove a Conservative news app but what would happen if they removed a Liberal news app?

And they are OUTRAGED that they do not control the flow of information anymore thanks to the internet, Facebook, Twitter, and talk radio.

So rather than win on ideas they have decided to purge the conservative websites from the marketplace of ideas.

The Apple store removed Breitbart.com from their App store recently.
If you do a search on “Breitbart” or “BreitbartNews” this is what you get. 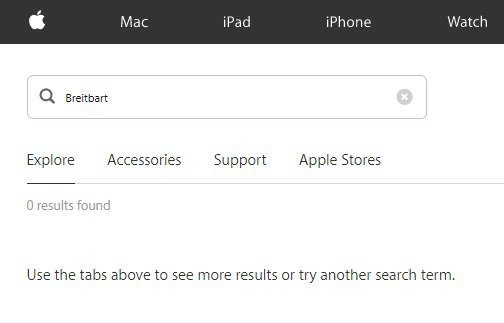 They’ve removed it.
Breitbart had 45 million monthly readers last month.
They’re too much of a threat.

Breaking: Looks like Apple has removed Breitbart from their app Store

So a Christian must make a gay wedding cake but Apple’s exempt from Freedom of Speech. @Rambobiggs @RealAlexJones @foxnews @CNN #BBC

It’s clear who the modern day fascists are.