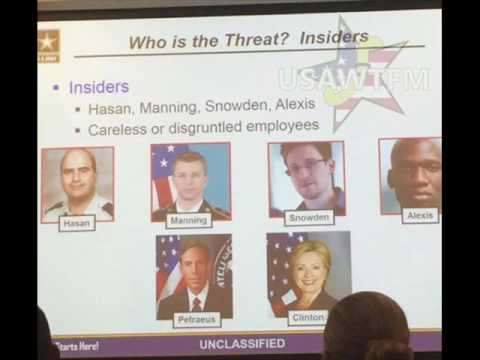 Well if the shoe fits… But how in the world can Hillary be an insider threat and still be the democratic presidential nominee?

An Army training presentation lists the woman who could be the next commander in chief as an insider threat, underneath the sailor who carried out the Navy Yard shooting.

A photo posted to the U.S. Army W.T.F! Moments Facebook page on Sunday shows an unclassified Army training slide on insider threats and handling classified information. An Army spokesman has since confirmed that the image is authentic.

On the slide are six photos, including one of Hillary Clinton, who sent classified information using her personal server.

Maj. Thomas Campbell, a U.S. Army Training and Doctrine Command spokesman, confirmed that the photo showed a real training slide that was developed 18 months ago and used locally to teach best practices for handling classified information and maintaining operational security. The training slide has since been removed, he said.

“As is common with Army training requirements, the local unit was given latitude to develop their own training products to accomplish the overall training objective. This particular presentation had not been reviewed or approved by the unit’s leadership, and does not reflect the position of the Army,” Campbell said.