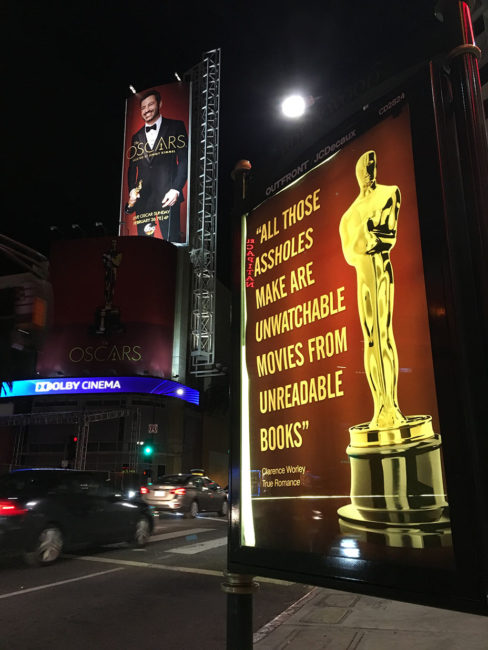 Thank you Sabo for giving all us deplorables a voice. For saying what the rest of us working men and women are thinking, but don’t have the platform to do so.

I’m so sick of hollywood being so out of touch with Americans that live in the real world. If they had to live the way the rest of us do, it wouldn’t take them long to garner a different perspective. Keep up the great work you do.

We love Sabo! He is a street artist who’s unafraid to plaster in-your-face artwork all over Hollywood bashing the liberal elites. He’s probably most famous for his beefcake poster of Ted Cruz. Please check out his website: UNSAVORY AGENTS 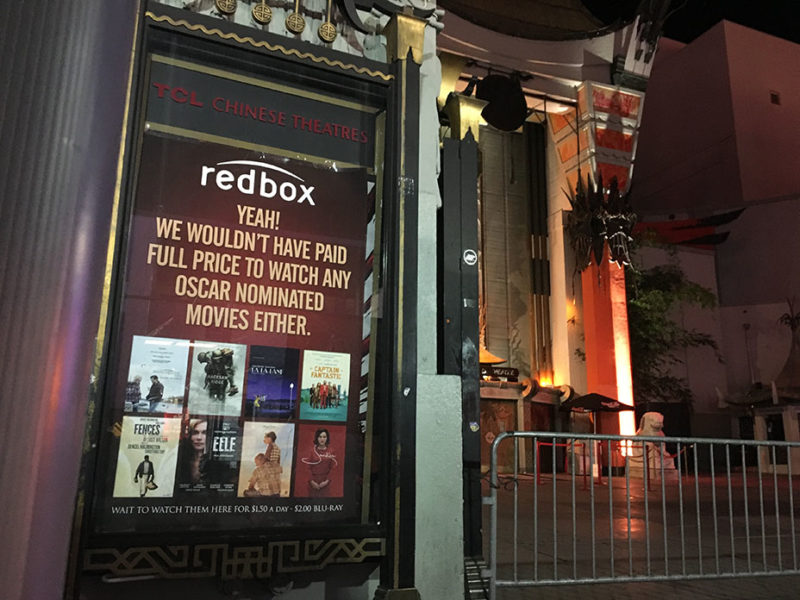 In the dead of night, Sabo plastered his posters all over town, in hard-to-reach places where they look like genuine advertisements.

Sabo, an artist who has made a name for himself with real-looking movie posters that skewer liberalism, plastered his latest creations all over Hollywood and Highland, a stone’s throw from where celebrities will be walking the red carpet.

In the dead of night Thursday and early Friday morning, Sabo plastered his posters all over town, in hard-to-reach places where they look like genuine advertisements.

“All those assholes make are unwatchable movies from unreadable books,” says one large poster containing a giant image of an Oscar statuette. The text was borrowed from Tarantino’s True Romance.

Sabo also created ads for Redbox and even built some replicas of the movie rental service’s iconic kiosks. More

I hardly ever go to movies anymore and it there’s ever a movie I really want to see I’ll just wait for it to show up in ReBox. I’ll admit the reasons I do this are a bit petty. It’s my own little way to rebel by putting as little money possible into the big liberal Hollywood machine. Out of touch actors who rail against my political beliefs drove me to it.

Shia LaBeouf, Bryan Cranston, Cher, Madonna, Ashley Judd, Matt Damon, Ben Affleck … I could go on all day, have shot their mouths off long enough calling people like myself every vile name in the book, again and again, and again, and again. I used to really love movies and the occasional tv show but not so much these days. I “discount” what goes on in them these days more than ever.

I’m sure many people are wondering if anyone is going to out Meryl Streep her Golden Globe anti-Trump tirade on Sunday night at the Oscars.

Recently a Hollywood Reporter pole revealed 6 out of 10 Americans can’t even name one Best Picture Nominee.

What this tells me is America for the most part is more and more discounting what’s coming out of Hollywood. And I’m sure many who do eventually watch these movies are waiting for them to show up on RedBox because $1.50 is all they think they are worth. More

SURPRISE! Meet The Convicted Terrorist Behind The Next Women’s March Calling For A “New Wave Of Militant Feminist Struggle"