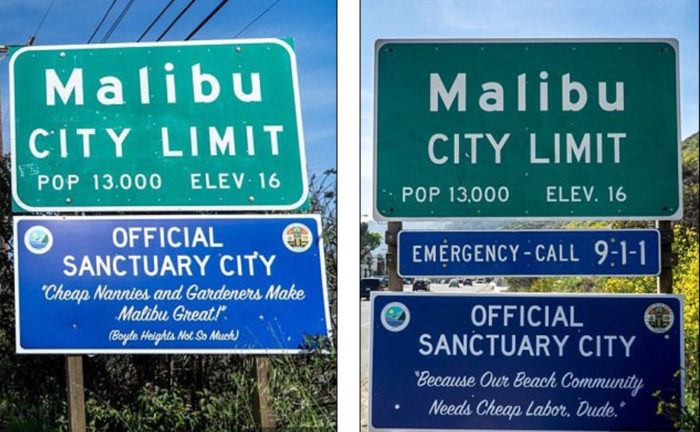 What makes humor work is there needs to be a sliver of truth to it. This prank is hilarious. Good job sticking it to limousine liberals. These pranksters should have welded those signs to the post making it even harder to remove! Priceless…

The elite enclave of Malibu, California appears to have been the target of a ring-wing prank.

Official-looking signs were set up at the city limits on Tuesday, boasting about the town’s new status as an ‘OFFICIAL SANCTUARY CITY’. But drivers who looked closer saw that not all was as it seemed.

Both signs had taglines criticizing the picture-perfect veneer of the wealth Los Angeles suburb.

‘Cheap nannies and gardeners make Malibu great! (Boyle Heights not so much)’ one sign read, referring to a predominately Latino neighborhood in LA. The other stated: ‘Because our beach community needs cheap labor, dude.’

City council members said that the signs were a prank, and they were taken down by Wednesday morning.
No one has taken credit for the signs so far.

But street artist Sabo said that they were put up by some friends who work in Hollywood and didn’t want to be blacklisted from the liberal industry. More

Pelosi's Unhinged Rant Attack Against Ivanka: “We’re Not Here To Talk About The President’s Family, But The Fact Is…” (Video)

Cartoon: Piggyback Over The Line