Making America Great Again requires that we hold all these pukes accountable… Go ahead and unleash the hounds!

TGP: Many questions still surround the now discredited ‘Trump dossier.’ Where did it really come from? Who funded it? Most importantly, did the Obama administration use it as a pretext to spy on Trump officials? If a FISA warrant was obtained using the dossier, it could have “staggering,” implications says former U.S. Attorney Joseph diGenova. 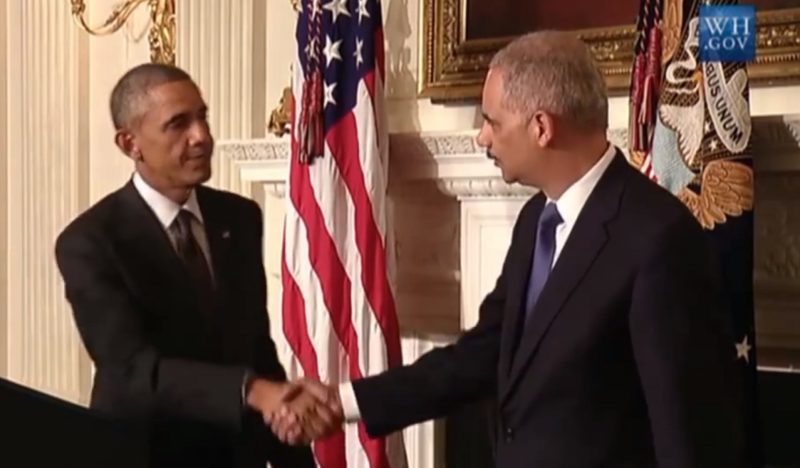 Daily Caller reports: “[House] Republicans want to know whether intelligence agencies used any information from the Christopher Steele dossier, especially for FISA warrants,” a congressional official with knowledge of the investigation told TheDCNF.

The FISA court was established by Congress in 1978 under the Federal Intelligence Surveillance Act. A FISA court judge must accept a formal application from the Justice Department to approve a “warrant” for electronic surveillance, physical search, and other forms of investigative actions for foreign intelligence purposes.

If the unsubstantiated dossier information was entered as verifiable information before a FISA court, the implications are “staggering,” former U.S. Attorney Joseph diGenova told TheDCNF.

The possibility the Obama administration might use the unproven allegations before a FISA court “constitutes a crime of unbelievable dimensions,” he said, adding: “It requires the empanelment of a federal grand jury.”

Glenn Simpson, co-founder of Fusion GPS, the firm behind the debunked ‘Russian dossier’ to smear Trump refuses to tell Congress who the political sources are that commissioned the salacious document.

The Daily Caller reported: Fusion GPS also stands behind the dossier, a lawyer for the firm said at the end of a 10-hour interview given by co-founder Glenn Simpson.

“Mr. Simpson told Congress the truth and cleared the record on many matters of interest to congressional investigators. He also kept the identities of Fusion GPS’ clients confidential,” Josh Levy, Simpson’s attorney, told The Daily Caller in a statement.

Simpson appeared for the interview after weeks of negotiations between his attorneys and the committee, which is one of three congressional panels investigation potential collusion between the Trump campaign and Russian government.

Here is more background on the now-discredited Trump Dossier.

With just ten days to go before he was sworn in as America’s forty-fifth president, the political establishment went nuclear on President-elect Donald Trump with a double-barreled blast of “leaked” “intelligence” reports by CNN and BuzzFeed.

One of the most outrageous unconfirmed allegations in the report claims the Russians recorded Trump watching Russian prostitutes urinate on each other in a Moscow hotel room previously occupied by President and Mrs. Barack Obama.

According to the “leaked” “intelligence” documents: Trump disliked Obama so much that he hired two Russian hookers to piss on a bed that Obama slept on in Russia.

Some news: Fusion GPS co-founders will invoke their constitutional privileges not to testify before the HPSCI after Nunes subpoena. Story TK pic.twitter.com/dLZ8iJypx9

On Monday, GPS Fusion founders refused Rep. Nunes’ request to testify before the House Intelligence Committee. The founders cited constitutional privileges as their reason to refuse, claiming they cannot in good conscience appear before the panel.

Fusion GPS' cofounders are using a 'novel legal argument' to punch back at Devin Nunes https://t.co/kkStAJyt30 via @PoliticsInsider

Business Insider reports: The cofounders of the opposition research firm that produced the dossier alleging ties between President Donald Trump’s campaign team and Russia will invoke constitutional privileges and decline to testify before the House Intelligence Committee, their attorney wrote in a letter obtained by Business Insider on Monday.

“We cannot in good conscience do anything but advise our clients to stand on their constitutional privileges, the attorney work product doctrine and contractual obligations,” wrote Fusion GPS counsel Josh Levy in response to subpoenas issued earlier this month by the committee’s chairman, Rep. Devin Nunes.

Levy argued that complying with the subpoenas would violate “the First Amendment rights” of the cofounders — Glenn Simpson, Thomas Catan, and Peter Fritsch — “and would chill any American running for office … from conducting confidential opposition research in an election.”