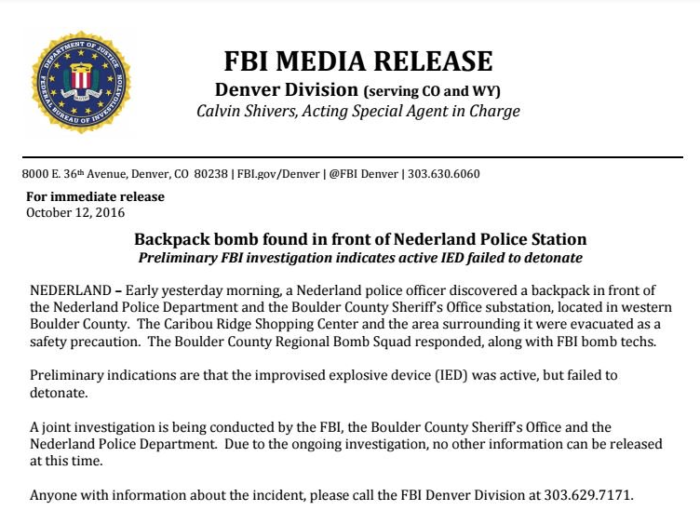 Why is there no media coverage on this bomb in front of this police station? Is the media only covering stories that involve black shooting victims?

Nothing seemed out of the ordinary at Nederland’s Caribou Ridge Shopping Center on Wednesday afternoon — at least on the surface — but residents remained on edge after someone left a homemade bomb outside of the police department the day before.

“I don’t think anyone is going to take a breath until someone is in custody,” said Jeffrey Green, owner of the Very Nice Brewing Company.

Green was tending bar on Wednesday afternoon, about 13 hours after the Boulder County Bomb Squad detonated the bomb about 100 feet away from his front door after using two robots to examine it for more than 12 hours.

The Federal Bureau of Investigation — which is leading the investigation — has determined that the bomb, which was found inside a backpack, was active but failed to detonate.

Rumors had circulated the day before that there was not a bomb, with some people hearing a cake had been dropped off for the police or a transient had left behind a bag of marijuana and a pipe. By Wednesday afternoon, it had sunk in that the truth was far worse.

“I think people are scared,” Green said. “At first people thought it was just a goofy Nederland thing. It really shocked them that it turned out to be an explosive device.”

The bomb prompted the evacuation of the shopping center all day on Tuesday, and shop owners were busy catching up on Wednesday — among them, Dam Liquor Store operating manager and co-owner Scott Havnes.

“Tuesday was my order day, so I missed all my orders,” Havnes said. “Now I’m trying to recover and get everything back to normal. We lost about $4,000 in sales yesterday.”

Police decided it was not safe to move the bomb and detonated it at about 1:45 a.m. in the parking lot of the shopping center. Town Administrator Alisha Reis said officials grappled with whether to issue reverse 911 calls to residents, but she was glad they did after hearing it go off from her home. More