WATCH: BBC Anchor Panics & Abruptly Cuts Off John McLaughlin When He Brings Up Media Brazenly Ignoring Sale Of Uranium By Hillary To Russians

It’s a known fact that Hillary Clinton sold Uranium to the Russians. Why is it so hard for people to think of the Clinton’s as the most corrupt couple in America?

The BBC abruptly cuts short as John McLaughlin points out there are no facts or evidence of Russian collusion with the Trump Campaign and that in fact Hillary Clinton and the Clinton Foundation received much greater sums of money from Russia as printed in The New York Times. “I cannot allow you to say those things on air without those people being here to defend themselves” … unless it’s Liberals making the accusations and lying. 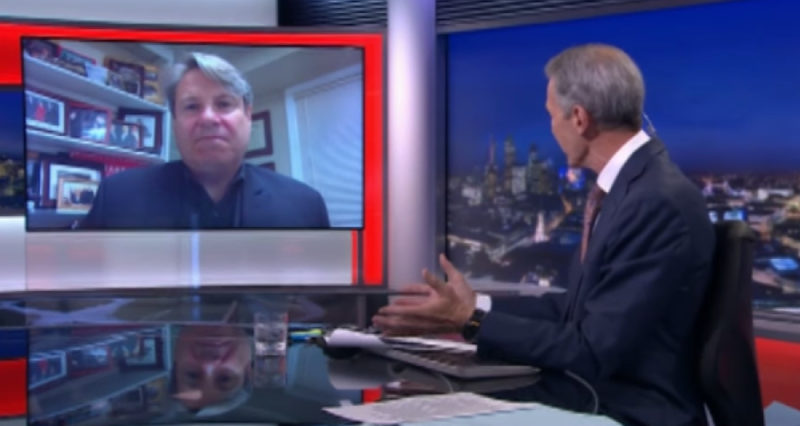 Oh boy, talk about the most cowardly way of cutting off an interview when the facts get in the way of your liberal agenda. They don’t want to hear any facts because it upsets their propaganda and their ability to spin stories the way they would like too.

The more the Democrats and their allies in the media attempt to discredit President Trump, the more they expose the truth about their own willingness to look away from the crimes committed by the Democrats. The more the American people see how far the media is willing to go to shut down the truth, the less they are going to believe anything they report. Something tells us the media is about to be very sorry they played with fire… 100%FedUp.

John McLaughlin, CEO of McLaughlin & Associates and Trump for President 2016 Campaign Pollster, has his interview abruptly cut short as he points out there are no facts in evidence of any Trump Campaign/Russian collusion in the 2016 election and that Hillary Clinton and the Clinton Foundation have taken in vast sums of money from Russia, much more than Lt. Gen. Michael Flynn could ever. McLaughlin online.

Below are articles verifying McLaughlin’s arguments.

WATCH: BBC Anchor Panics & Abruptly Cuts Off John McLaughlin When He Brings Up Media Brazenly Ignoring Sale Of Uranium By Hillary To Russians