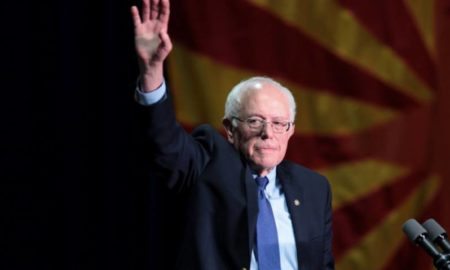 Jane Sanders was caught on a hot mic saying “they don’t know your name is being put in nomination. That is the concern.”

Jane Sanders had a hot mic moment during Bernie Sanders’ DNC speech, which prompted massive speculation among pundits and supporters after hearing what she said.
During a rally on Monday afternoon in which the Vermont senator was encouraging his supporters to vote for Hillary Clinton to stop Donald Trump (and getting booed by supporters), Jane, was heard whispering to Bernie on a live microphone, “They don’t know your name is being put in nomination. That’s the concern.”

Watch the moment below:

Senator Sanders is speaking to the Democratic National Convention tonight, and according to a press release about his prepared remarks, the Vermont senator is expected to double down on his endorsement of Hillary Clinton.

However, the fallout from the DNC emails revealed by WikiLeaks on the eve of the convention, along with Hillary Clinton giving disgraced former DNC chair Debbie Wasserman Schultz a top position in her campaign, has some Sanders supporters hoping their candidate will rebel against the Democratic establishment.

Even if the roll call vote isn’t successful, it’s clear that Hillary Clinton will have a difficult time uniting the Democratic Party around her candidacy. A new election forecast from Nate Silver’s FiveThirtyEight.com projects Trump to win a plurality of electoral college votes in November, including victories in critical swing states like Florida, Ohio, and Pennsylvania. Clinton’s sole swing state victories are Colorado and Virginia, according to FiveThirtyEight’s map.

Pic: Dem Protesters Kept Out Of DNC By Wall