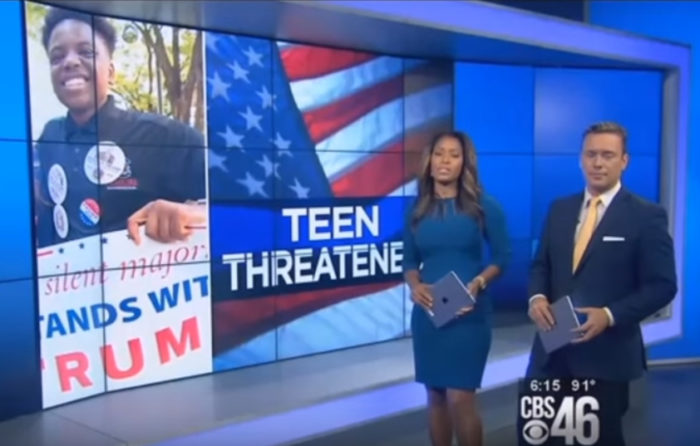 Courageous young man, too bad he cannot vote this go around. If he were a Democrat, he’d be voting several times.

WTVM: Two weeks following a heated debate with a protester at a Donald Trump rally in Atlanta, life has drastically changed for 16-year-old Quay Manuel.

“I was just thinking I’m going to out-smart him with kindness,” Manuel said.

Manuel became an overnight sensation on social media, but not everyone was a fan. He’s received numerous death threats for his support of Trump.

The teenage Trump supporter has been brutally harassed online.

“One comment I remember said that we should go clip this n*****, and clip means we’re going to take you out, basically, and it’s absolutely insane,” Manuel said.

He’s also been told he was letting every ancestor he had down, he’s been called racial slurs and even bullied at work.

When asked if the threats make him want to back out of politics, he didn’t hesitate to respond.

“I don’t because it actually makes me want to move this campaign forward because that means I’m touching so many people,” Manuel said.

While members of the Black Lives Matter movement may not agree with Manuel’s political views, they did say they don’t condone the threats.

That said, Black Lives Matter did express one concern with the young Trump supporter.

Manuel told CBS46 he was at the rally with friends and their parents. He also said some of the threats were turned over authorities.

On a side note, he said he was initially a Ted Cruz supporter but made the switch when Trump gained momentum.