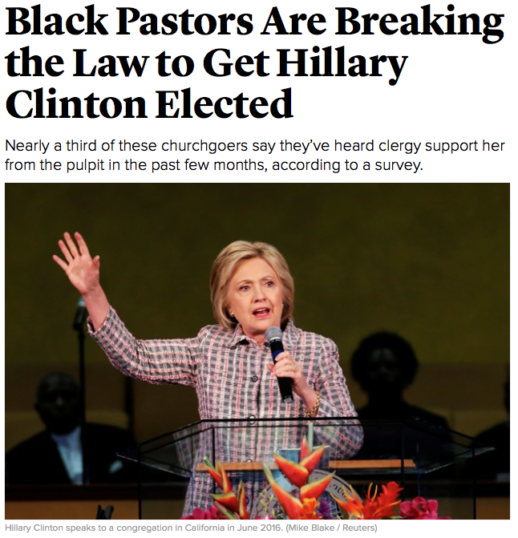 It is illegal for clergy to support or oppose political candidates from the pulpit. Houses of worship can host candidate forums and voter-registration drives; pastors and rabbis and imams can even bend the rules a little to advocate “as individuals” at conventions or other events. But for more than 60 years, religious groups have been forbidden from electioneering.

Apparently, a lot of pastors don’t pay attention to this rule. According to a new survey from Pew Research Center, roughly 9 percent of people who have attended religious services in the last few months have heard clergy speak out in favor of a political candidate, and roughly 11 percent have heard clergy speak in opposition. What’s remarkable, though, is how much this is apparently happening at one particular kind of church: those run by black Protestants.

Fully 28 percent of those who have attended black Protestant churches in the last few months heard their pastor support Hillary Clinton. Seven percent experienced the opposite—their leaders opposed the U.S. Democratic presidential nominee. On the whole, though, black pastors are much more opposed to Donald Trump: 20 percent of recent attendees said they’ve heard comments against Trump at church. This kind of political advocacy apparently extends to down-ballot races, too: 9 percent of black-church attendees heard clergy speak in favor of a candidate who wasn’t Trump or Clinton, while 6 percent heard their pastors speak in opposition.

To be clear, political speech is not punishable by jail time; the worst possible consequence for a house of worship is losing its status as a tax-exempt 501(c)(3) organization. The IRS has the authority to audit and fine congregations if they suspect them of campaigning or lobbying. The agency rarely exercises this right, though; in recent years, low on budget and increasingly facing public criticism, it has emphasized education, rather than enforcement. More