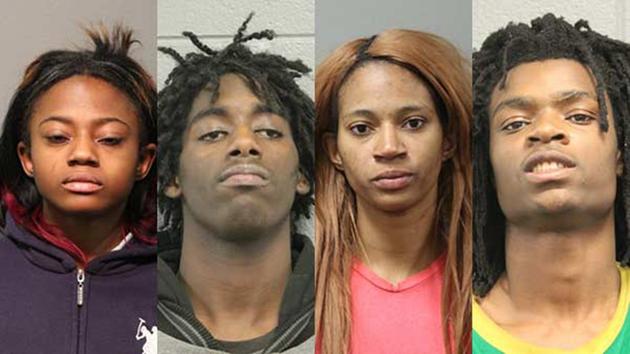 These suspects should be charged with a hate crime. If the roles were reversed the whole country would be in an uproar and riots would have already started.

Update to this story here.

The four alleged attackers who terrorized a white, mentally disabled man in Chicago and streamed footage of the disturbing incident online have been charged with a hate crime.

The four individuals, who are black, allegedly held an 18-year-old special-needs man hostage and tortured him in an apartment on the West Side of the city, streaming the horrific ordeal on Facebook Live.

The victim can be seen in the video bound and gagged as his attackers beat him and cut his scalp with a knife. He cowers in a corner on the floor as someone urges him to say, “I love black people.”

“F–k Donald Trump, n—a, f–k white people!” one of the suspects tells the man in the video, which was live streaming for roughly 30 minutes.

The victim was also forced to drink toilet water as he was berated, according to reports.

The suspects are expected to appear in bond court Friday.

The victim, who officials said was “traumatized” after the Tuesday attack, is a resident of the suburban Crystal Lake and one of the suspects from school, said Chicago Police Department Commander Kevin Duffin.

The victim was reported missing by his parents on Monday.

A day earlier Duffin was hesitant to peg the attack a hate crime, drawing the ire of some social media users.