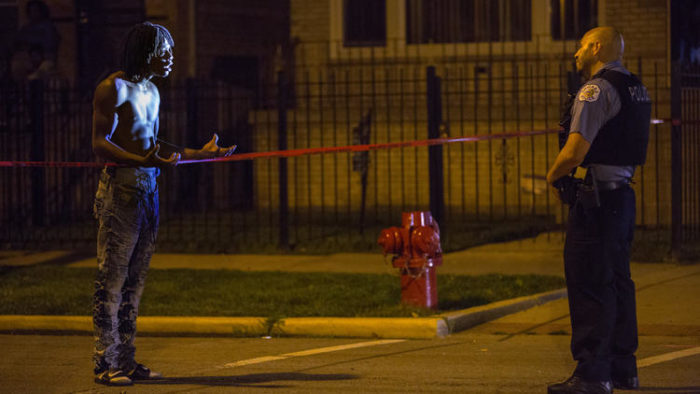 What is wrong with people? These officers are trying to do their job and investigate this murder but keep having to stop and deal with these immature people.

“Run, b—-, run!” a young shirtless man shouted as officers sprinted down an alley to check out the gunfire. Then, with mock concern, he added: “Hey, there’s somebody dead in the alley!”

There was no one dead in the alley. Police suspected the shots were a prank by a group of young men who had been heckling them for about an hour at the scene of a shooting that wounded a 22-year-old man in the 7100 block of South Paulina Street about 12:50 a.m.

Standing in a line not far from the crime scene tape, they had been alternately threatening and teasing the officers.

Some of the officers returned the taunts, telling them to get jobs and calling out to the block that the men were snitches. “You’ve been talking to me for a year, don’t play in front of your boys!” a sergeant teased.

One officer grabbed his phone and held it out to face the crowd. “Hey, say it again,” he said. “This is going on YouTube.”

They answered him with a chorus of “F— the police!”

One young man darted under the rows of police tape that blocked off the intersection. An officer followed him onto 72nd Street with a Taser in hand. Several others followed. They caught him and held him against the wall of a brick house at the corner.

“What you think the tape is for?” an officer asked him.

They cuffed him and put him in the back of a police car to cool down.

His friends crowded the tape. “What’s the charge?” More