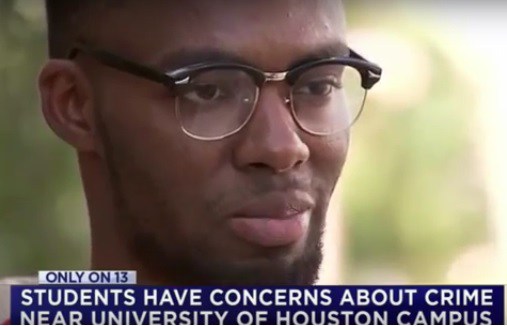 When is BLM going to learn that you can’t have it both ways? You can’t protest the police and then demand more police protection. Doesn’t that go against everything they protest?

A University of Houston grad student was robbed at gunpoint just outside his off-campus apartment by a man he mistook as a student.

Jerry Ford Jr. has fought for social justice around Houston as one of the leaders of the Black Lives Matter movement. But Wednesday night, he became a victim.

“The guy was standing right here just seemed like he was hanging out,” Ford said. “I told him wassup. He asked me did I have a key to get in. I told him yeah I’m about to go upstairs.”

Ford lives just blocks from the UH campus at the Vue on MacGregor apartments.

“I reach in right here to open the door and I turn back around and he has the gun right there in my face,” he tells us.

The bad guy took his wallet and his phone and ran off into MacGregor Park.

“It was just a couple of weeks ago that somebody was robbed just across the bayou at the bus stop,” said Aaron Maxwell.

Last month, dozens of vehicles were broken into at the Campus Vue apartments around the corner.

Maxwell is a sophomore transfer student who also lives at the Vue on MacGregor. He says he didn’t know about the robbery until we told him about it.

“It’s a little daunting. I’m not from Houston and I just moved here for school and everything. And it seems to be…it’s not just here at this property, it’s the area,” he said.

All this as the university touts its record enrollment. These apartments mainly house UH students, but the university says UH Police do not patrol them. Ford says that needs to change.

“It’s becoming a pattern. I hope they would take a bigger stance and put more security over here because you have a lot of people walking back and forth to class,” Ford said.

As scary as this was, Ford actually feels bad for the guy. More

2 Clinton IT Aides Plead The Fifth, Another Skips Hearing