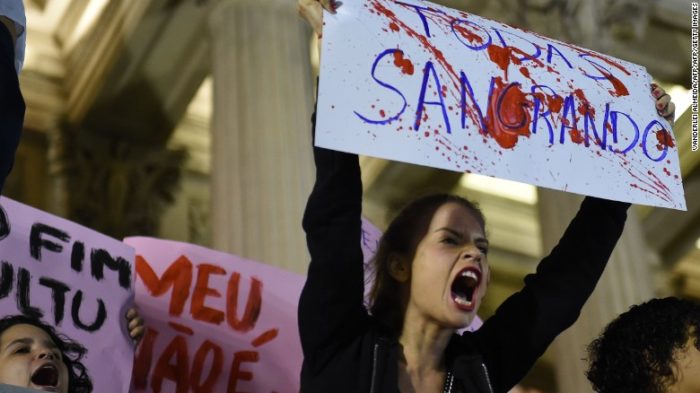 What a brave girl to speak out about being brutally gang raped. I hope they identify and catch the 30+ men who were involved and bring them to justice.

The Brazilian teenage girl who says she was brutally gang raped in a Rio de Janeiro slum is speaking out about the attack and the related graphic video that went viral.

“If I have to wait for the justice system, they’ve already shown that nothing is going to happen,” she told CNN affiliate TV Record in the presence of her attorney. “I am waiting for the justice of God. That might be late but it never fails.”
In the interview, the 16-year-old’s face is hidden as she recounts what she remembers from the attack and the mix of humiliation and support that she has received since the images surfaced online.
The case has shocked Brazil, a country accustomed to a high level of violence, and sparked backlash on social media and impromptu protests in a number of cities.
In Rio de Janeiro, the city that will be hosting hundreds of thousands of visitors for the Summer Olympics in August, protesters hung red-stained clothes along the iconic Copacabana Beach over the weekend.

In Brasilia, police used pepper spray on protesters who tried to march on the Supreme Court with bouquets of flowers and signs denouncing what they called a “culture of rape” in Brazil.
The scandal erupted last week when a 38-second video was posted to Twitter, showing the victim naked and unconscious while male voices bragged about “at least 30” people having sex with her.

The girl then came forward.
In the interview released over the weekend, she says:
“I fell asleep and woke up in a completely different place, with a man under me, one on top of me and two holding me down, on my hands. Many people laughing at me, and I was drugged, out of it. Many people with guns, boys laughing and talking.”
Police have said they are trying to identify at least 30 people involved in the incident. No arrests have been made so far. More