Switzerland, France, England are all learning a very hard lesson and it is costing the lives of hundreds, the safety and culture of millions.

Why would they be “stunned” by the news of Sharia courts being used by the Muslims? It is what they do. Muslims subvert freedom, oppress women, etc. etc. etc.

100%FedUp: Like dominoes, the Hijra keeps marching across Europe, destroying the distinct cultures of one country after another. Sweden and the UK are in big trouble…France is next…and thanks to bleeding heart liberal Democrats in America, the U.S. isn’t far behind… 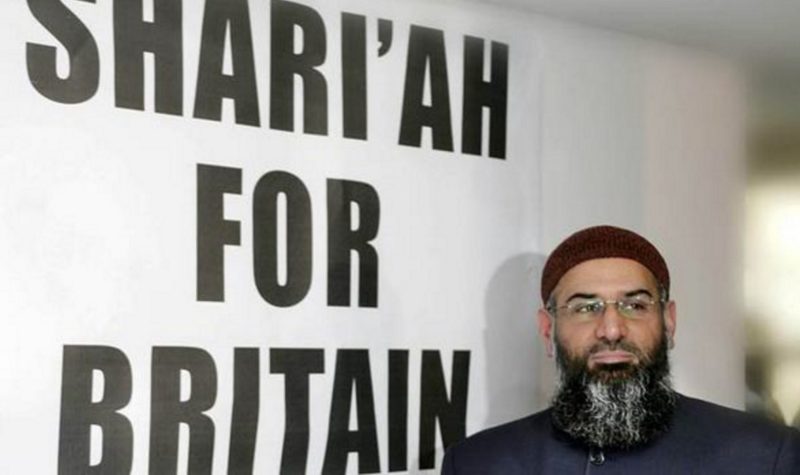 At least 85 Islamic sharia courts are operating in Britain, a study claimed yesterday.

The astonishing figure is 17 times higher than previously accepted.

The tribunals, working mainly from mosques, settle financial and family disputes according to religious principles. They lay down judgments which can be given full legal status if approved in national law courts.

However, they operate behind doors that are closed to independent observers and their decisions are likely to be unfair to women and backed by intimidation, a report by independent think-tank Civitas said.

Commentators on the influence of sharia law often count only the five courts in London, Manchester, Bradford, Birmingham and Nuneaton that are run by the Muslim Arbitration Tribunal, a body whose rulings are enforced through the state courts under the 1996 Arbitration Act.

But the study by academic and Islamic specialist Denis MacEoin estimates there are at least 85 working tribunals.

The spread of sharia law has become increasingly controversial since its role was backed last year by Archbishop of Canterbury Dr Rowan Williams and Lord Phillips, the Lord Chief Justice who stepped down last October.

Dr Williams said a recognised role for sharia law seemed ‘unavoidable’ and Lord Phillips said there was no reason why decisions made on sharia principles should not be recognised by the national courts.

But the Civitas report said the principles on which sharia courts work are indicated by the fatwas – religious decrees – set out on websites run by British mosques.

Mr MacEoin said: ‘Among the rulings we find some that advise illegal actions and others that transgress human rights standards as applied by British courts.’

Examples set out in his study include a ruling that no Muslim woman may marry a non-Muslim man unless he converts to Islam and that any children of a woman who does should be taken from her until she marries a Muslim.

Further rulings, according to the report, approve polygamous marriage and enforce a woman’s duty to have sex with her husband on his demand.

The report added: ‘The fact that so many sharia rulings in Britain relate to cases concerning divorce and custody of children is of particular concern, as women are not equal in sharia law, and sharia contains no specific commitment to the best interests of the child that is fundamental to family law in the UK.

‘Under sharia, a male child belongs to the father after the age of seven, regardless of circumstances.’

It said: ‘Sharia courts operating in Britain may be handing down rulings that are inappropriate to this country because they are linked to elements in Islamic law that are seriously out of step with trends in Western legislation.’

The Civitas study said the Islamic courts should no longer be recognised under British law.

Its director Dr David Green said: ‘The reality is that for many Muslims, sharia courts are in practice part of an institutionalised atmosphere of intimidation, backed by the ultimate sanction of a death threat.’

Philip Davies, Tory MP for Shipley, said: ‘Everyone should be deeply concerned about the extent of these courts.

‘They do entrench division in society, and do nothing to entrench integration or community cohesion. It leads to a segregated society.

‘There should be one law, and that should be British law. We can’t have a situation where people can choose which system of law they follow and which they do not.

‘We can’t have a situation where people choose the system of law which they feel gives them the best outcome. Everyone should equal under one law.’

New Yorker Magazine Argues America Should Not Have Had A Revolution