Is Gov. Moonbeam building an army?

Perhaps if Governor Jerry Brown spent more time worrying about his own state’s well being and less about President Donald Trump, California might not have the horrific financial issues they are currently experiencing. Leave it to a Democrat to try and tell others how to run their house when they can’t even run their own.

In a contentious interview with BBC radio, California Governor Jerry Brown has threatened to sue the Trump administration over climate change, while vowing to “stabilize the ship of state.” 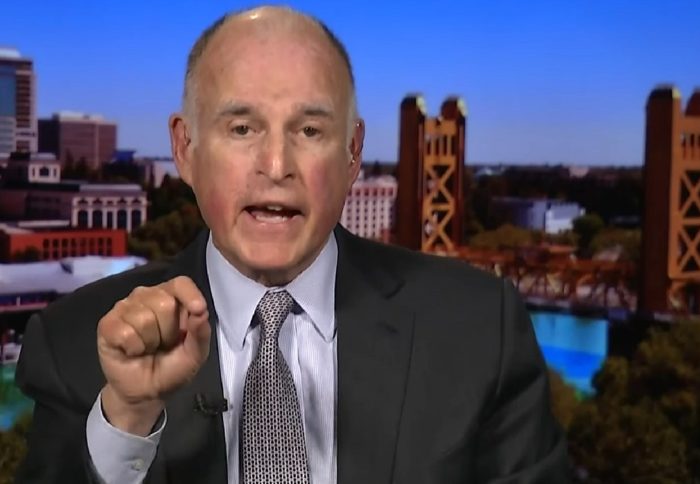 “The president is working to delegitimize the very notion of climate change,” Brown told Jim Naughtie of the BBC in a program that aired Tuesday, while the position of California is to go “against the policies of President Trump.”

“I hope the rest of the world does their part in providing a forceful opposition,” he said.

“Trump has declared war on a majority of the American people under the guise of supporting his minority base and it’s very dangerous,” Brown said. “It’s very disruptive for America, and I’m going to do everything I can to stabilize the ship of state.”

The governor went on to say that the president uses the issue of global warming to “work” his constituency. “I think he sees this as a galvanizing rhetoric for his base,” he said.

Regarding Trump’s withdrawal of America from Paris climate accord, Brown said that California will “go to court and block his efforts.”

“We are building a coalition that covers about 30 percent of the GDP of the world and well more than a billion people,” he said. “So, we are taking action in California. We are linking up with other similar-minded people all over the world. And we are pushing forward, even as Trump blusters, he cannot command the tides to not come in.” Read more at BNN.

Is this not inciting violence against the President of the United States of America?