Bus Driver That Was Speeding & Killed 5 Kids, Said “Are Y’all Ready To Die?” 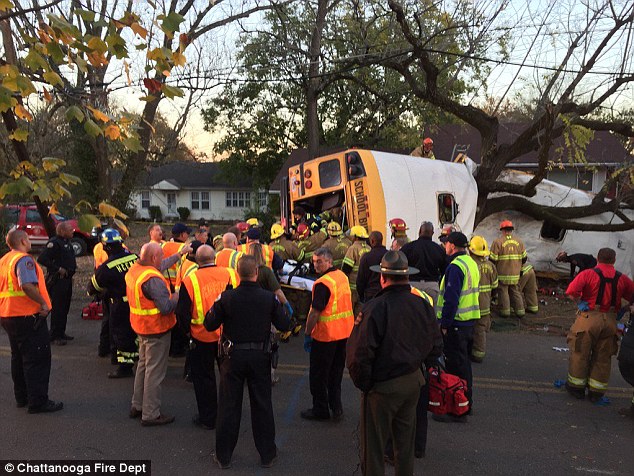 What a tragic story. Why didn’t the school board do anything about this bus driver when the parent were complaining about his driving and actions?

The heartbroken mother-of three children who were victims in a school bus crash has spoken out about her attempts to report the bus driver for reckless driving.

Jasmine Mateen said that since the school year started in August, her children have come home each day complaining about their bus driver.

‘I have been calling complaining about this bus driver since August,’ she told NBC News.

Mateen said she called the Board of Education and Woodmore Elementary School and even wrote letters to the school and to the bus driver, Johnthony Walker.

Walker has been arrested and charged with five counts of vehicular homicide after the bus crashed and killed five children and injured 23 more on Monday afternoon.

One of those victims was Mateen’s six-year-old daughter, who has not been identified.

Mateen told NBC that the school’s ‘principal read the letter to the bus driver two weeks ago’, when she wrote the letter.

‘She read the letter out loud in front of all the kids and after she got done with the letter he said “so, I’d do it again.”‘

Mateen said her letter was about Walker ‘slamming on breaks on purpose’ and ‘making all of the kids hit their head’.

She said her children would tell her horror stories about how Walker would drink ‘every day on the bus’, ‘always cuss at them’ and ‘was always speeding’.

Mateen told NBC that the Board of Education called her about her children, two of which are still in the hospital being treated for their injuries.

She said she told them ‘y’all doing what y’all supposed to be doing now that it’s too late’.

‘Y’all doing what y’all supposed to be doing but my baby laying in a cold freezer,’ Mateen said as she broke down into tears.

Earlier on Tuesday, Mateen said that the last words Walker said to the children before he sped around a curb and crashed the bus, were reportedly: ‘Are y’all ready to die?’

‘My daughter said, right before the bus flipped, that he was speeding around the curb, and asked them, ‘are y’all ready to die?’ Mateen told CBS News Radio.

Walker’s mother Gwenevere Cook claims that her son is a responsible father and called her immediately after the fatal crash to tell her what happened as he helped rescue the children from the wreck.

‘Mama, I love you. I have been in a drastic accident,’ Cook told CNN she recalled her son saying.

‘He texted me minutes later saying the kids are dead. He was trying to get [the children]off the bus – all the bodies were limp.’ More

SHARIA IN AMERICA? How Minneapolis Muslims Are Still Being Recruited By Terrorists

Bus Driver That Was Speeding & Killed 5 Kids, Said “Are Y’all Ready To Die?”