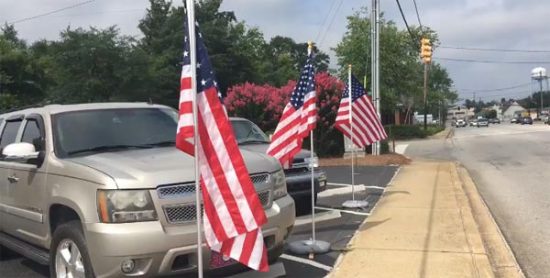 What a stupid ordinance to have! Why can’t he have as many american flags as he wants as long as it isn’t blocking traffic?

A town of Lexington business owner says he’s being forced to remove 10 flags he placed outside of his business to celebrate the upcoming Fourth of July holiday.

Bob Michaelis of Michaelis Mattress Company in Lexington says he was asked to remove the patriotic display because it violates a 1999 town ordinance. According to the town ordinance, only three flags that are not duplicates of each other can be displayed in “restricted and intense development districts.”

Michaelis, a Marine, says he wanted to “show appreciation to our troops” with the display.

“We got 10 flags up,” Michaelis said. “I thought maybe it was about time we return to the patriotism in America. There’s not enough of it. It seems to be lost.”

However, the Lexington Police Department sent word to Michaelis about the display and told him to remove the flags.

“I put them up yesterday and the city and the town of Lexington says they got to come down because there’s an ordinance in place,” Michaelis said.

Meanwhile, Michaelis says he has no intentions of removing the flags at the moment. If he is non-compliant, he could face a fine.

Word of the ordinance, of course, brought out the passions of many Lexington residents.

“It’s a free county,” resident Carson Haloman said. “I think that anybody can fly as much flags as they want. I don’t think he should take it down. I think he has his own right to do whatever he wanted with the flags.”

“I think we should respect the ordinance,” Michaelis admitted. “They’re there to protect everybody. I think that a little lenience on special holidays would be great.”

In response, Town Administrator Britt Poole says at no time did the town tell Michaelis that his flags had to come down. Instead, Poole says, Michaelis was reminded of the ordinance on the books and “ask them to call to see if something could be worked out.”

“At no time was a citation or even a warning ticket written,” Poole said in a statement. “Just a request for a conversation.” More

Four Bombs Found In Illinois Home After Threat To Police...