Unbelievable! There is no redeeming quality when you’re a liberal. They are the party of hate, death, and destruction.

100%FedUp: The classless Democrats are at it again. The over-the-top potty talk by the Chairman Tom Perez was bad enough but now the California Dem Chairman has raised the bar on nastiness. He prompts the crowd to yell out “[email protected] Donald Trump!” The kicker is that Nancy Pelosi was caught laughing with the crowd. How unbelievably childish are these people? 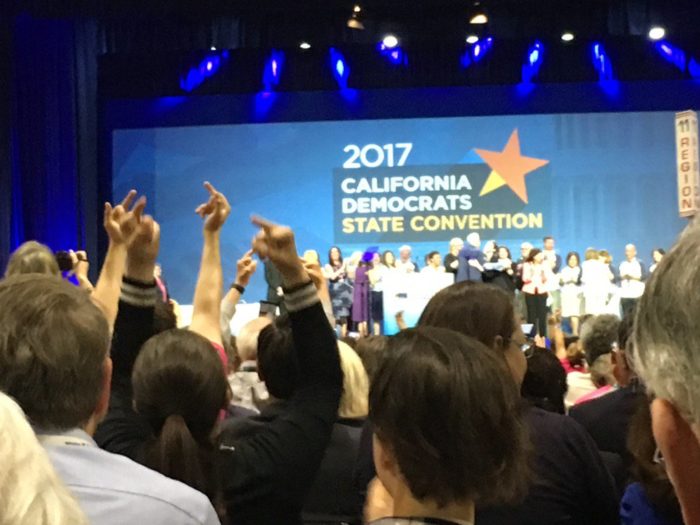 TGP: California – The classless Democrats gathered in Sacramento for a state convention on Saturday. They had some harsh words for the President as they chanted, ‘F*** Donald Trump!’

AP: California’s elected Democrats had tough words for President Donald Trump and the GOP Congress on Saturday, urging their party’s fired-up activists to work against the 14 Republicans in the state’s congressional delegation.

The party’s leaders blasted Trump’s alleged ties to Russia and presented California as the epicenter of liberal resistance to the president.

“The world, literally the world, is counting on all of you, counting on California to reject Trump’s deception and destructiveness,” said Lt. Gov. Gavin Newsom, who is among a crowded field of Democrats running for governor next year.

In a sign of the vigor of the party’s distaste for the president, outgoing party Chair John Burton, a longtime Democratic lawmaker and powerbroker known for his blunt and profane manner, extended two middle fingers in the air as the crowd cheered and joined him.

This is the Democrat party, folks…what a bunch of classless lowlifes…

#Democrats openly encourage disrupting town halls but if you try and disrupt #CADem17 “you are a fucking shit disturber..” #StayClassy pic.twitter.com/ndmzxEIh1R