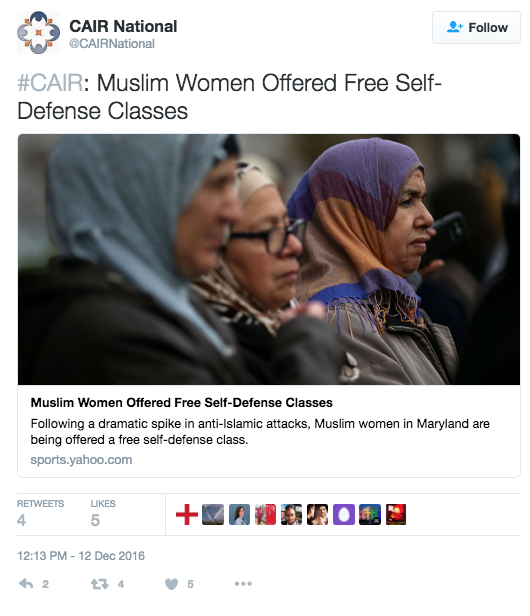 Why are Muslim women the only ones to get free self defense classes? Why not anyone who wants to learn self defense moves?

Following a spike in anti-Islamic attacks during and since the 2016 election campaign, Muslim women will be offered a free self-defense class this week in College Park, Maryland.

The workshop on Wednesday is being provided by the Council on American-Islamic Relations (CAIR) and the local Aqabah Karate Martial Arts Institute. It will offer tips to women and girls about how to “mentally, physically and spiritually prepare to defend against an attack,” according to a statement from CAIR. The event will also be live-streamed.

Hate crimes against Muslims in the United States have reached their highest level since the aftermath of the Sept. 11 attacks, following a rise of 67 percent in 2015 from the previous year, according to FBI figures. And women wearing hijabs, the traditional veil, have been a particular target.

“What we have seen is women being targeted. So particularly head-scarf wearing women,” Corey Saylor, director of the department to monitor and combat Islamophobia, told International Business Times last month. “From all the case summaries that I’ve seen, that’s the main target of this backlash. Because they’re very visible. The head scarf tends to be what’s singled out in a lot of cases we’ve seen.”

Chaudry said that she is aware of four incidents of Muslim students having their headscarves grabbed on Maryland college campuses since the election.

The class in Maryland is not the first example of individuals attempting to protect against the threat.

Following the election, a therapist in Chicago, Zaineb Abdullah, who normally offers self-defense classes for deaf and hard-of-hearing people, posted a video online of what she termed the “Hijab Grab” escape following a flood of requests for assistance. The video has since gone viral, garnering close to 4 million views.

“People wanted to know if [there were]strategies for defending against bigoted attacks,” she told The Guardian. “I looked online and saw there was nothing. I kept hearing on the news that someone tore off this woman’s scarf and she sat on the floor and cried, or ran away crying; I’m so tired of that. Fear is a legitimate and reasonable reaction, but it’s not the only reaction we can have.”

Meanwhile, in New York City, the Muslim Community Network has set up a self-defense class for women and saw close to 3,000 women sign up.