California Refuses To Admit It Has A Voter Fraud Problem 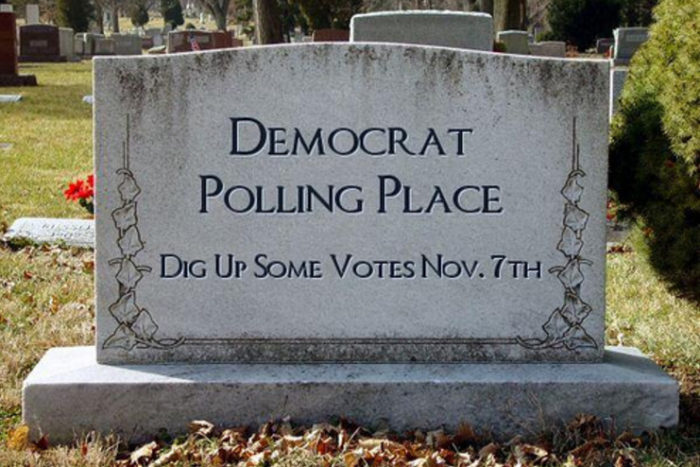 No need for those racist voter ID  laws in California. There will be historic record numbers of dead voters come November. All voting Democrat. Way too easy to see who is behind it all.

The Daily Signal: Hollywood has always loved making films about the walking dead, but in Southern California it appears they have a real life problem with “zombie” voters.

An investigation by CBSLA2 and KCAL9 found that hundreds of deceased persons are still on voter registration rolls in the area, and that many of these names have been voting for years in Los Angeles.

For example, John Cenkner died in 2003 according to Social Security Administration records, yet he voted in the 2004, 2005, 2006, 2008 and 2010 elections. His daughter told the station that she was “astounded” and couldn’t “understand how anybody” could get away with this.

Another voter, Julita Abutin, died in 2006 but voted in 2008, 2010, 2012, and 2014. According to CBS, the county confirmed they have “signed vote-by-mail envelopes” from Abutin since she passed away. So either someone has been forging her signature or her ghost has quite an earthly presence.

The investigation revealed that 265 deceases persons voted in Southern California, 215 of them in Los Angeles County. Thirty-two were repeat voters, with eight posthumously-cast ballots each. One woman who died in 1988 has been voting for 26 years, including in the 2014 election.

This report comes twenty years after the contested election of Rep. Loretta Sanchez. D-Calif., from this same area. An investigation by a U.S. House committee found that hundreds of illegal ballots were cast by noncitizens and improper absentee ballots. More

Ingraham: Hillary Stood By As Bill's Accusers Were Attacked

Chick-fil-A Has “Missing Man Table” Set To Honor Those Who Died Serving The U.S.

California Refuses To Admit It Has A Voter Fraud Problem