Unfortunately, the people who support this guy will flee to another state to infest and infect it too.

Forgive me if I am wrong but doesn’t the Constitution specifically forbid states from negotiating treaties with foreign nations?

No State shall, without the consent of Congress, lay any duty of tonnage, keep troops, or ships of war in time of peace, enter into any agreement or compact with another State, or with a foreign power, or engage in war, unless actually invaded, or in such imminent danger as will not admit of delay. 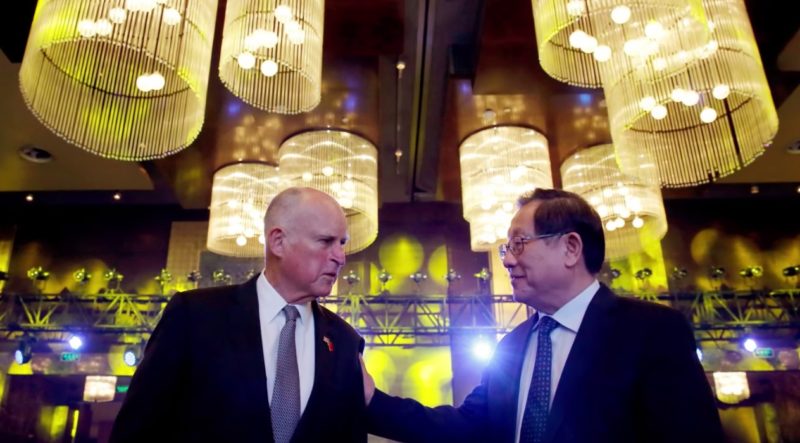 Breitbart: California Governor Jerry Brown signed a new climate change agreement between the State of California and the People’s Republic of China on Tuesday.
The gesture continued Brown’s efforts to expand ties with China, as well as his diplomatic campaign to push for more action on climate change. It came in the immediate aftermath of President Donald Trump’s decision to withdraw from the Paris Climate Accords.

A statement by Gov. Brown’s office described the new agreement as follows:

Specifically, the agreement expands cooperation on the advancement of low-carbon, renewable energy and energy efficiency technologies such as zero-emission vehicles, energy storage, grid modernization and low-carbon urban development. Under the agreement, California and China will also deepen their partnership and coordination on greenhouse gas emission and air pollution reduction programs, including emissions trading systems and carbon capture. More

AP: With President Donald Trump pulling the U.S. out of the Paris climate accord, China and California signed an agreement Tuesday to work together on reducing emissions, as the state’s governor warned that “disaster still looms” without urgent action.

Gov. Jerry Brown told The Associated Press at an international clean energy conference in Beijing that Trump’s decision to pull the U.S. out of the Paris agreement will ultimately prove only a temporary setback.

For now, he said, China, European countries and individual U.S. states will fill the gap left by the federal government’s move to abdicate leadership on the issue.

“Nobody can stay on the sidelines. We can’t afford any dropouts in the tremendous human challenge to make the transition to a sustainable future,” Brown said. “Disaster still looms and we’ve got to make the turn.” More

NSA Leaker’s Parents: ‘She Was Afraid She Was Going to Disappear’ (Video)