Pathetic cowards, why are they caving into the Antifa animals? The Annual Gettysburg Reenactment went off without a hitch. No violence, no protesting, in spite of the hype and the effort to create widespread paranoia. Come on, folks! Are we really going to let a handful of psychopaths frighten us into silence and total submission?

Way to go City of Manassas officials. We said after 9/11 that we were not going to allow the terrorists to dictate how we live our lives but here you go doing exactly that. 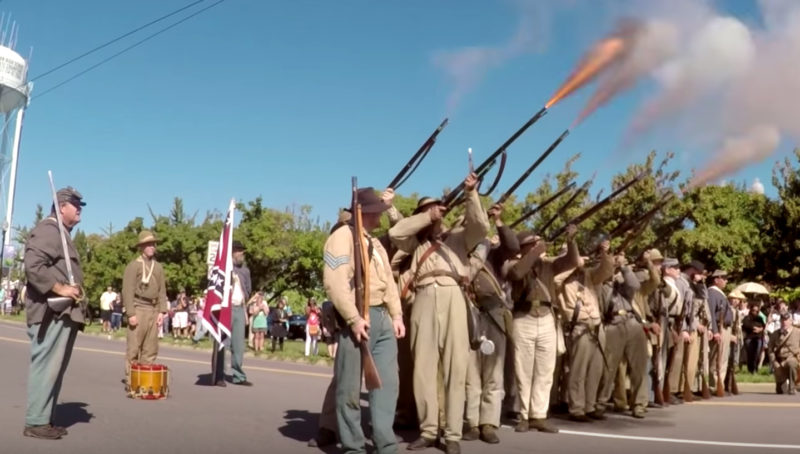 WTOP: A Virginia city is canceling a planned “Civil War Weekend” in the wake of last week’s violence in Charlottesville, Virginia.

The city of Manassas issued a statement Friday announcing the Civil War Weekend planned for Aug. 25-27, has been canceled. The city said its leaders are saddened by recent violence and want to avoid making the situation worse.

“Recent events have ignited passions in this country surrounding the Civil War and the symbols representing it,” the statement said, noting the move was for the “the safety of our residents, visitors and reenactors.” More

Pl: This week, the nation has been embroiled in a debate over whether or not to remove Confederate statues from public spaces. On the Manassas National Battlefield in Prince William County, a statue of General Thomas “Stonewall” Jackson will stay.

However, the names of two county schools — Stonewall Middle, and Stonewall Jackson Senior High School — are in question.

The Battle of 1st Manassas in 1861 was one of the first battles of the war, where Stonewall Jackson earned his nickname. Two major battles were fought here.

Tourists from all over the country flock to the region to walk the battlefield, and then tour the shops in Manassas, which served as a major railroad junction during the war. More