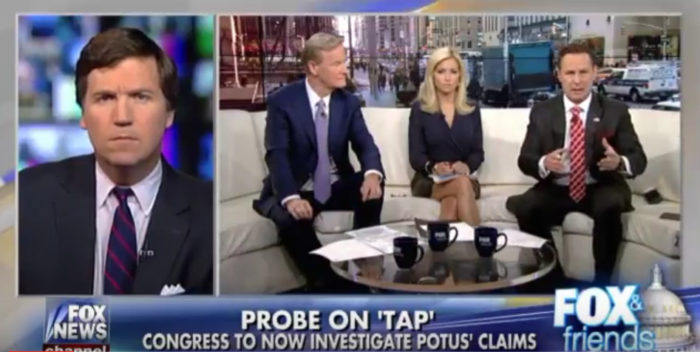 Tucker Carlson: “The Press Is Willfully Ignoring The Truth… This Stuff Does Happen… They’re Lying About It.”

I believe in Trump and he hasn’t been wrong yet. He’s not afraid to stand up and speak the truth. Maybe Trump will be the first of many of a new kind of “politician” that this country really needs.

FOX and Friends spoke with Tucker Carlson this morning about allegations President Trump made on Twitter over the weekend about Obama wiretapping Trump Towers prior to the election.

Steve Doocy asked Tucker what he thinks about the Trump allegations of wiretapping by Barack Obama. Carlson responds by saying, “This is a real problem. The US government spying on its own citizens is a longstanding fact. It’s a huge problem and it’s clouded by deceit and evasion. Just, here’s one fact: We don’t know how many Americans have their communications swept up by because the intelligence community won’t tell us. Not only will they not tell us, they won’t tell the Congress which is supposed to provide oversight to them. They’ve been asked directly and they say,’we don’t know and we’re not going to find out.’ So, this is an infuriating problem. We know for a fact that the National Security Advisor, when he was a private citizen, before the inauguration, was surveilled by the FBI and that that was leaked. That’s a felony. We know this stuff happens, and we know that it has a corrosive effect on government and our civic life and yet we’re not debating it at all. Partly because Twitter is not the way to raise this issue, and partly because the Democrats don’t want to talk about it. But, I guess the bottom line is, ‘yes,’ this is plausible and we need to find out what happened and it doesn’t seem like we’re moving in the direction of finding out.”

Ainsley Earhardt asks Tucker Carlson,“What happens next though Tucker, going forward? Will we be able to find out any of this information, or will is it something that will just be swept under the rug again?” More