WOW! Mike Cernovich questions the White House press reporters on why they are covering up the epidemic of liberal violence against conservatives.

The smug elitist reporters were actually laughing or blatantly ignoring him. This is why people hate the out of touch lame-stream media!

TGP: Author and activist Mike Cernovich entered the White House press room today and lectured the liberal reporters on why they refuse to cover the epidemic of liberal violence. 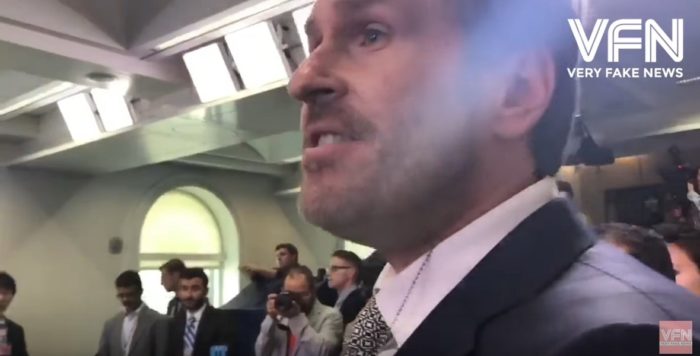 THEN HE LET THEM HAVE IT!

THIS WAS EPIC!
Will the liberal reporters cover this up too?

Media won’t even call on their colleagues in the Democratic Party to denounce liberal violence. pic.twitter.com/xz6HPEthyK via @Cernovich

HOW MANY TRUMP SUPPORTERS MUST BE BEATEN BLOODY BEFORE THE MEDIA AND AUTHORITIES REACT?

WHEN WILL FAR LEFT GOONS BE ARRESTED FOR THEIR CONSTANT CRIMINAL ASSAULT AND THREATS?

Trump supporters were seen running for their lives.

The San Jose Police released documents on the planned brutal assault of Trump supporters. An undercover San Jose Officer reported after the rally that throughout the afternoon and evening he watched several individuals wearing “Trump” articles of clothing getting punched, kicked and pushed.

This wasn’t an isolated incident.

Scott Sauter, a gay conservative, was walking from a comedy club back to his apartment in the Riverside Neighborhood of Austin, Texas this Sunday when he was brutally attacked, just for supporting our president. More