What makes Chelsea Clinton think she’s an authority on anything? She has always been a spoiled and entitled brat that has been handed everything while riding on her parent’s coattails.

What makes her think she can lecture me on anything much less racism? 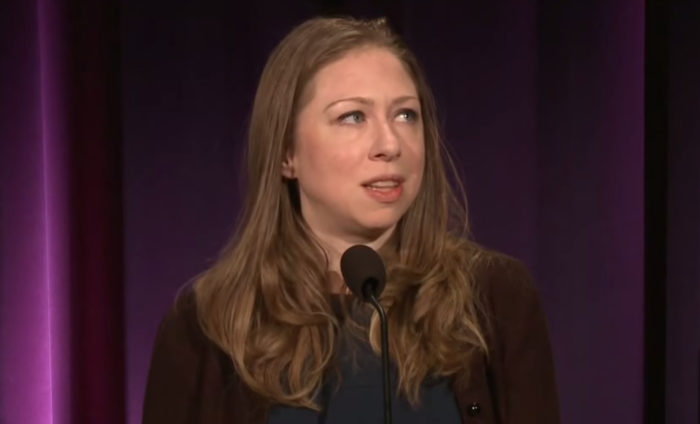 TGP: Chelsea Clinton, who is known for doing absolutely nothing other than grift through life on her last name thinks she’s in a position to lecture ‘white parents’ about how to raise their children.

Chelsea Clinton is a white woman who makes nearly $1 million a year for doing zero work. Perhaps she learned the game from her mother who called blacks ‘super predators’ and ripped off Haitians after a devastating earthquake. Or just like Bill Clinton who passed the Omnibus Crime Bill in the 90’s which incarcerated a record number of blacks.

Chelsea Clinton sent out a tweet saying, “White parents need to talk about racism & hate with our children.”

Painful & powerful. Thank you Crystal for sharing. White parents need to talk about racism & hate with our children throughout their lives. https://t.co/INyy9UeX4H

According to Chelsea Clinton, only whites can be racist…the internet responded accordingly:

☝🏻☝🏻 When Life Proves ☝🏾☝🏾
Chelsea & Her Mom Are Racists
Who Judge By The Color Of Skin
& Not By The Content Of Character #SundayMorning pic.twitter.com/VUv1VD0vjs

So only white people are racist???? NOT

All parents need to talk to their kids..not just ‘white’ parents..🙄 Don’t be a racist, Chelsea..

Chelsea is just sticking to democrat narrative that all whites are bad. I remember Killary trying to talk “black” in a speech. LOL

So confused ..Chelsea maybe you should tell your “white parents” not use people of color just to get votes Just pawns to suit your narrative

Wasn’t it Chelsea Clinton’s mom who called young black men super predators? Why YES, yes it was. Hypocrisy thy name is Clinton

What did your mom teach you? How did she pay for your wedding??..oh yeah #Haiti #MAGA pic.twitter.com/j7ccD3fRJP

Want to talk about Racism, Chelsea? Did you think about that hungry little Haitian girl on your wedding day? Observe 👇🏻👇🏻👇🏻 pic.twitter.com/3MLoquyVHU

Was Debbie Wasserman Schultz Having Affair With Criminal IT Staffer Imran Awan?

Questions Begin Surfacing Regarding Imran Awan's Attorney And His Connections To Bill And Hillary!