BLM Activist Says ‘We Need to Abolish the Police’ 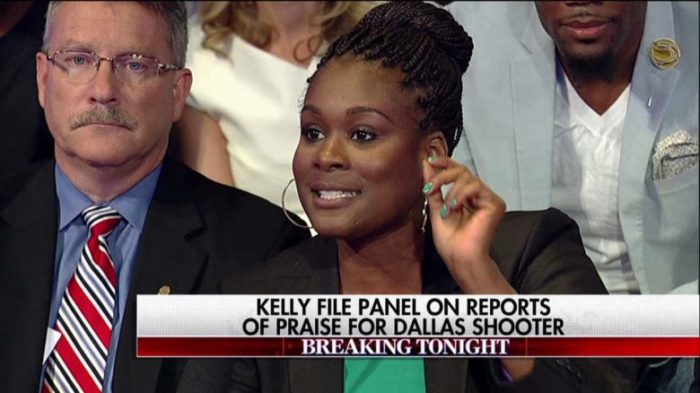 This BLM activist is nuts! The police are people from the community trying to protect and serve their own neighborhoods. Both sides are playing the blame game instead of coming up with real solutions that will actually solve issues instead of causing more anger and hatred.

A Black Lives Matter activist from Chicago argued during a heated Kelly File discussion that American police forces should be abolished.

“Here are the solutions. We need to abolish the police, period. Demilitarize the police, disarm the police, and we need to come up with community solutions for transformative justice,” said Jessica Disu, drawing some shocked reactions.

The conversation started with Megyn Kelly asking the panel – which included Black Rights Matter supporters, law enforcement officers, conservative commentators and religious leaders – about some who praised the Dallas gunman.

Disu, who described herself as a community organizer, said that Black Lives Matter has never called for violence against anyone.

She did not comment when Kelly pointed out that some protesters have called for “dead cops.”

Megyn Kelly asked her how citizens would be protected if police forces were “abolished.”

“We need to come up with community solutions. The police force in this country began as slave patrol,” Disu argued.

Ron Hosko, former FBI assistant director, said the country needs “leadership,” and to seriously invest in police like we invest in “critical infrastructure.”

Tom Verni, a retired NYPD officer, called on Disu to “get back to reality,” arguing that the United States is “doomed” unless it roots out racism, homophobia and sexism in general. More

Inmate Was Handcuffed Before He Fatally Shot 2

BLM Activist Says ‘We Need to Abolish the Police’