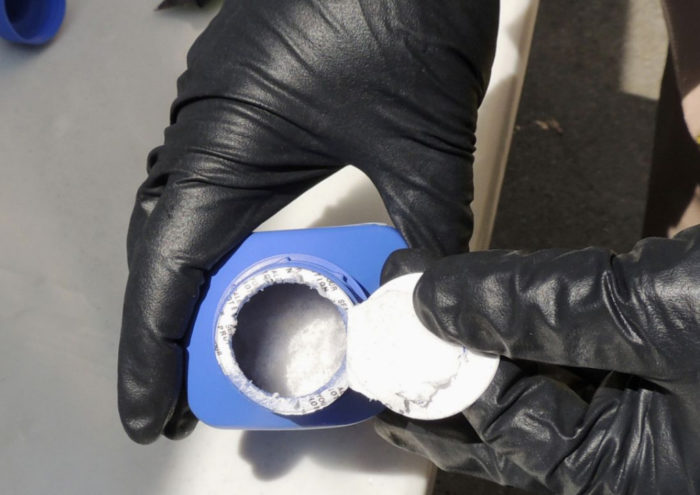 Via: Royal Canadian Mounted Police, a member of the RCMP opens a printer ink bottle containing the opioid carfentanil imported from China.

You need to read this now: It’s truly frightening!

This information should be front page news, not buried. As I get older and more savvy on world issues, I am sickened by the idea that our own government is controlling so much of the information and hiding it from Americans. We are told that certain knowledge is kept quiet to protect us.

For a few thousand dollars, Chinese companies offer to export a powerful chemical that has been killing unsuspecting drug users and is so lethal that it presents a potential terrorism threat, an Associated Press investigation has found.

The AP identified 12 Chinese businesses that said they would export the chemical — a synthetic opioid known as carfentanil — to the United States, Canada, the United Kingdom, France, Germany, Belgium and Australia for as little as $2,750 a kilogram (2.2 pounds), no questions asked.

Carfentanil burst into view this summer, the latest scourge in an epidemic of opioid abuse that has killed tens of thousands of people in the United States alone. Dealers have been cutting carfentanil and its weaker cousin, fentanyl, into heroin and other illicit drugs to boost profit margins .

Despite the dangers, carfentanil is not a controlled substance in China, where it is manufactured legally and sold openly online. The U.S. government is pressing China to blacklist carfentanil, but Beijing has yet to act, leaving a substance whose lethal qualities have been compared with nerve gas to flow into foreign markets unabated.

“We can supply carfentanil … for sure,” a saleswoman from Jilin Tely Import and Export Co. wrote in broken English in a September email. “And it’s one of our hot sales product.” More