“Hate will not be tolerated,” yet the person defacing the statue is in fact hateful. And what’s coming next is probably going to be their arrest.

They can deface and take down all the statues they want, it won’t change history. The leaders of the past, right or wrong, as they made the great country we are today.

NY Post: A vandal defiled a larger-than-life statue of Christopher Columbus in Central Park on Tuesday, leaving “blood”-red paint on the explorer’s hands and scrawling “Hate will not be tolerated” on its pedestal.

The vandal also left an apparent threat at the base of the 7-foot-tall bronze: “#somethingscoming.” 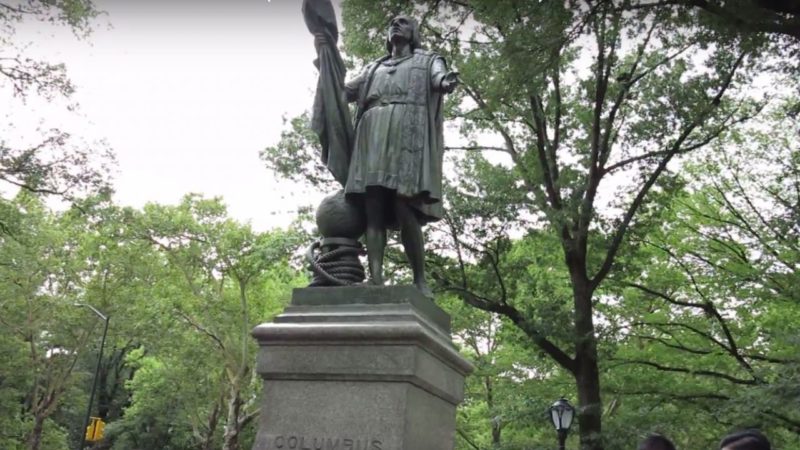 A worker for the Central Park Conservancy, the nonprofit which oversees maintenance in the park, discovered the vandalized statue, located in the southern portion of the park at the foot of The Mall walkway near Center Drive, around 7 a.m. and called police, authorities said.

Christopher Columbus statue in Central Park this morning
HATE WILL NOT BE TOLERATED (which, yikes)#SomethingsComing https://t.co/LcVuYHZCeN pic.twitter.com/YV3AxVpvR6

TB: A Christopher Columbus statue was found in New York City’s Central Park with red paint covering its hands and graffiti on the statue’s base declaring that “HATE WILL NOT BE TOLERATED” — as well as a creepy warning that “#somethingscoming.”

A sign reading “save your soul” was stuck to the statue’s base as well:

Blood on Columbus statue's hands with 'save your soul' and #somethingscoming #centralpark pic.twitter.com/yJ06Rw523w

Protests against the celebration of Columbus Day — a federal holiday — have been gaining steam in recent years. But with the widespread vandalism and dismantling of Confederate monuments that followed deadly demonstrations over a Robert E. Lee statue in Charlottesville, Virginia, last month, anger over other historical figures has spread.

To wit: A Columbus statue was beheaded in Yonkers, New York, in August.

Taking the burgeoning discontent to heart, NYC Mayor Bill de Blasio vowed to remove all “symbols of hate” from the city’s five boroughs, commissioning a task force to work for 90 days on identifying them. More