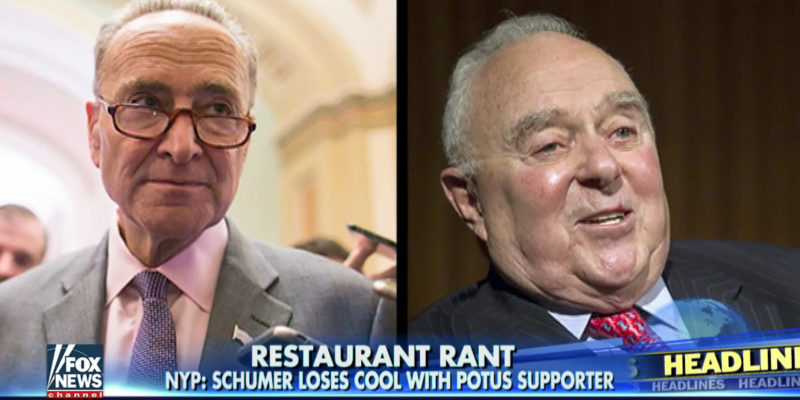 Schumer never fails to take advantage of a situation to make a fool out of himself.

Sen. Chuck Schumer, D-N.Y., caused a scene at a Manhattan restaurant when he began yelling at a wealthy and well-connected Donald Trump supporter that the POTUS is “a liar.”

Schumer, the top Senate Democrat, lost his cool on Sunday night at Upper East Side restaurant Sette Mezzo, according to witnesses.

He was dining with friends when he encountered Joseph A. Califano Jr. — the former U.S. secretary of health, education and welfare under President Jimmy Carter and domestic policy adviser to President Lyndon B. Johnson — and his wife, Hilary, who were having a quiet dinner.

Onlookers said Schumer was incensed that Hilary — the daughter of William S. Paley, the founder and chairman of CBS — had voted for Trump, even though her husband, Joseph, is a well-known Democrat.

One witness said of the restaurant rant, “They are a highly respected couple, and Schumer made a scene, yelling, ‘She voted for Trump!’ The Califanos left the restaurant, but Schumer followed them outside.” On the sidewalk, Schumer carried on with his fantastical filibuster: “ ‘How could you vote for Trump? He’s a liar!’ He kept repeating, ‘He’s a liar!’ ” More