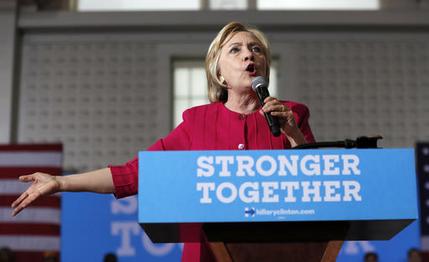 This is not surprising at all. Even though Hillary stated that there was no connection between the Clinton Foundation and anything she did as Secretary of State, there clearly is a one.

More than half the people outside the government who met with Hillary Clinton while she was secretary of state gave money – either personally or through companies or groups – to the Clinton Foundation. It’s an extraordinary proportion indicating her possible ethics challenges if elected president.

At least 85 of 154 people from private interests who met or had phone conversations scheduled with Clinton while she led the State Department donated to her family charity or pledged commitments to its international programs, according to a review of State Department calendars released so far to The Associated Press. Combined, the 85 donors contributed as much as $156 million. At least 40 donated more than $100,000 each, and 20 gave more than $1 million.

Among those granted time with Clinton included an internationally known economist who asked for her help as the Bangladesh government pressured him to resign from a nonprofit bank he ran; a Wall Street executive who sought Clinton’s help with a visa problem; and Estee Lauder executives who were listed as meeting with Clinton while her department worked with the firm’s corporate charity to counter gender-based violence in South Africa.

The meetings between the Democratic presidential nominee and foundation donors do not appear to violate legal agreements Clinton and former president Bill Clinton signed before she joined the State Department in 2009. But the frequency of the overlaps shows the intermingling of access and donations, and fuels perceptions that giving the foundation money was a price of admission for face time with Clinton. Her calendars and emails released as recently as this week describe scores of contacts she and her top aides had with foundation donors.

The AP’s findings represent the first systematic effort to calculate the scope of the intersecting interests of Clinton Foundation donors and people who met personally with Clinton or spoke to her by phone about their needs.