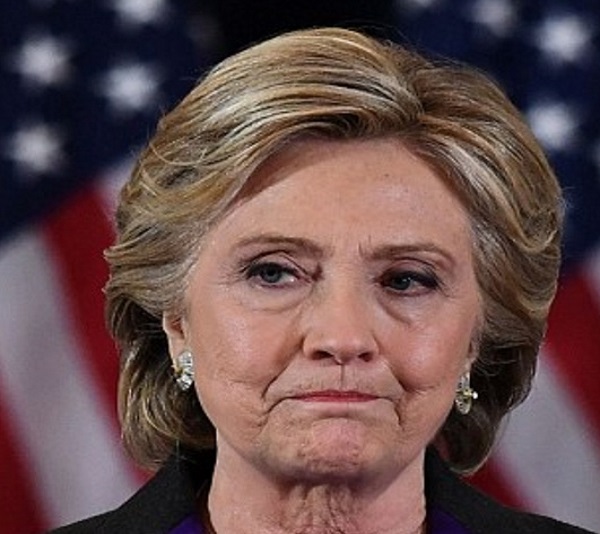 So Hillary was inconsolable? I can’t seem to find one ounce of sympathy for her. Did she learn her lesson you just don’t ignore those fly over states? She put herself in this position and now she is being a sore loser. Suck it up buttercup!

Best-selling conservative author Ed Klein told Newsmax TV that once the former first lady learned she had really lost to Trump, she called one of her friends crying.

‘About 6:30 this morning she called an old friend,’ he said while appearing on ‘The Steve Malzberg Show’ on Wednesday.

She was crying, inconsolably. She couldn’t stop crying.

‘Her friend said — her female friend from way, way, back — said that it was even hard to understand what she was saying, she was crying so hard.

‘This is Hillary we’re talking about.’

Klein did not reveal who her longtime female friend was during the interview, but he also revealed Clinton apparently blamed FBI Director James Comey for her stunning loss.

‘Eventually her friend said she could make out that she was blaming James Comey, the director of the FBI, for her loss — and this I don’t understand exactly — and the president of the United States for not doing enough,’ Klein stated.

‘She said: ‘Well, she felt, Hillary felt, that the president could have stopped Comey a long time ago, because that’s what (former President) Bill (Clinton) said.’

Eleven days before the election, Comey reopened the FBI investigation into her private email server, but concluded that she would not face any charges on Sunday.

It soon was revealed that the FBI had come across thousands of additional emails related to Clinton while investigating the laptop of disgraced ex-Rep. Anthony Weiner, who is married to Abedin, though the two are now estranged.

As DailyMail.com reported, Weiner, who quit Congress after a sexting scandal, allegedly sent inappropriate messages to an underage girl.  More

Actress Wants To ‘Take Out’ Trump Supporters With Baseball Bat